Can you help us with some Schumann, please?

An unusual request from our string quartet diarist, Anthea Kreston:

I need your help. Is anyone good at musical detective work?  I am putting out a crowdsourcing request.

I nearly flipped out. We have been playing the Schumann 3 for many months now, and Schumann 2 for the past month. This week we started on Schumann 1.  For the first time, last week, we put 2 Schumanns together in one program, and for me, there was magical almost-symmetry, a way in which they informed one another – how some of his thoughts, which can often feel incomplete or inconclusive, had a corresponding answer in the other quartet.

These three quartets were written between June 4 and 22, 1842 – a span of less than three weeks, after a period in which he was unable to write because of a depressive episode. How could they not be conceived of as a whole – considering the short time in which they were composed?  They must belong to one another – overlaying pieces of the same puzzle, each piece only complete when seen through the lenses of the others. He presented them as a birthday present to Clara – it is amazing to think of them so young – she turned 23 in September of 1842.

Just because quartets up until this time had been packaged in neat, easy-to-digest 35-50 minute portions, doesn’t mean that a 2 hour piece of music (including connecting music) couldn’t be thought of, especially by someone as unique as Schumann.

Wouldn’t it be magical to hear what these three works would sound like, all together, and where is that missing music?  Is there a sketch, mention in a letter – something from Clara, Robert or even Johannes – more information out there?

If anything exists, can it be reconstructed? Or a new commission(s?) be made for bridge music?  If it were any other composer (the three Brahms quartets, for example), I don’t think I would be so keen – so certain that this could be pure magic. But – the combination of lightness and fantasy, interchanged with heavy, funny German dances and deep, throbbing and sweeping slow movements – these pieces read like novels. And together – a triptych.  It could be transformative.

When I read about this in Arnold Steinhardt’s book, I was sitting on a plane, heading to London. I was floored. As a student at Curtis, I worked with Mr. Steinhardt, but not enough or probably well enough for him to remember who I was, or to keep in contact. How to reach him – I needed more information. So – I Messengered Ida Kavafian, my “Violin Mom” – a teacher who embodied, for me, the perfect mix of inspiration, technical advice, and life lessons. And, of course, a deep dedication to all of her students – warmth and endless humor and encouragement.

To my delight, within the next 2 hours, these messages, below. The first one sent backstage from Wigmore – the final one backstage after the concert.

“Ida!  I just read something from Steinhardt in “The Art of Quartet Playing” where he talks about a destroyed copy of Schumann – bridge music between the quartets (so they could be played all together).  Do you know anything about this?  If not, do you see Mr. Steinhardt around and can you ask? I am obsessed.”

“HAHAHAHAHA!!! I’m sitting with him in auditions at Curtis. More later.”

“Wow! You shouldn’t be texting! Pay attention to those Paganini caprices!”

“So at first he’s made this cute comment that “well, she knows just about as much as I know about it”. But then he described how in the romantic era often people would improvise little tiny pieces/links between pieces. Apparently Josef Hoffman did that when he played recitals at Curtis and probably elsewhere. Apparently Schumann wrote some of these links between the first and second and then the second and third quartets but then he thought better of it. Arnold doesn’t know if they still exist.

How was your concert? I used to love playing at Wigmore!!!!”

“Quartet is fun!  I am always wanting to play on the g string, and they complain a little about it, but other than that all is well!  Please tell Mr. Steinhardt thank-you – I will try to keep researching and let you know if I find anything. My biggest hugs to my favorite teacher

“Hugs and kisses right back!

So – Slipped Disc readers – if you are so inclined, can you help me?  There must be some evidence somewhere – a mention of a house concert, letter, talk from musicians, a diary, sketch, something in a library or collection. I have never asked for your help before, but now is the time!  Together we could discover something incredible. 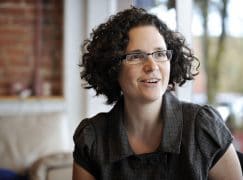 You can email me at Geigeberlin@yahoo.com.