An American first: Blind soprano is cast in major role

Ju Hyeon Han, who has been blind since she was a baby, played the significant role of Female Chorus last week in Benjamin Britten’s Rape of Lucretia.

It is claimed she is the first blind singer to be cast in a leading role in a US conservatory or university production.

Ju Hyeon is in her fourth year of a doctorate in Vocal Performance at Stony Brook University. 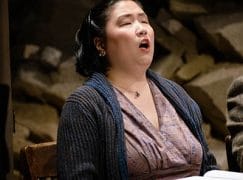