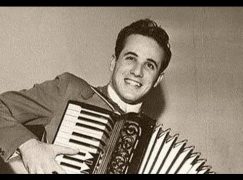 America’s Mr Accordion has died, at 87

He was jailed for draft dodging, served in in the Korea War and eventually received a presidential pardon, events that are reacts in a James Ellroy novella, Dick Contino’s Blues.

« Barenboim to France: Nationalism is not patriotism

PRS hands out half a billion pounds »