A flurry of issues over an ‘elitist’ Juilliard feature

A week ago the Wall Street Journal magazine published a 12-page spread on the performing arts school.

Initial reactions ranger from ‘that’s a nice piece of PR work’ to ‘this is eactly the sort of thing that gives classical music a bad name.’

The photographs showed preppy-looking types in designer clothes larking around at the school.

The feature is paywalled so we can’t show you very much.

But one concerned relative has been troubled by a significant, injurious bias in the promotion.

Here’s what she writes:
The Wall Street Journal’s April 3rd online magazine feature on Juilliard students with photographs taken by Thomas Gebremedhin could benefit from your attention. More specifically, the sheer absence of any Asian or Asian-American students from an otherwise diverse collection of several fashion forward musicians and dancers strikes any student, faculty/staff member, alum, or patron of the venerable institution as, well, peculiar.

Independent of one another, a cellist named Mosa Tsay and I both pointed out this omission of a specific demographic on Twitter.  It seems that either Mr. Gebremidhin or members of the editorial staff at the Wall Street Journal may not be inclined to regard Asian musicians as attractive enough to merit visual attention in the newspaper. Since students with cultural backgrounds stemming from Korea, Taiwan, China, Singapore, and Japan constitute a rather large percentage of the population attending Juilliard these days, the lacuna of such faces is startling, to say the least.  One wonders whether a deliberate omission has taken place rather than an unintentional oversight.  The photographer who attended both Duke and Philips Andover, according to LinkedIn, might be best positioned to answer this question accurately.  Apparently, he has not responded to Ms. Tsay’s inquiries.

Any assistance you could offer to draw attention to the hurt and insult felt by young dedicated musicians with surnames such as Lee, Wang, Kim, Zhang, Takebe, and Yu would be greatly appreciated.  My niece who attends Juilliard is deeply injured, as are many of her friends. However, she does not believe anyone would support her if she were to raise the issue. I told her I would do what I could on her behalf.

Juilliard is heavily dependant on its intake of Asian students. Who was on call when the photographer came round? 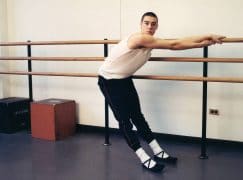