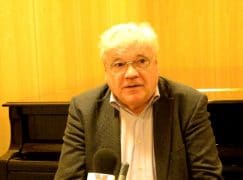 Lior Shambadal, chief conductor of the Berlin Symphoniker, has informed us of the death this week, from cancer, of the orchestra’s long-standing director, Jochen Thärichen.

Thärichen, who was 73, was Berlin musical royalty.

The son of Werner Thärichen, principal percussionist of the Berlin Philharmonic under Furtwängler and Karajan from 1948 to 1984, Jochen played trumpet for 20 years in the symphony orchestra until he took over as its director in 1989. After his official retirement in 2004, he continued running the orchestra without pay. He underwent surgery for cancer last October, but remained in charge until the day he died.

Lior Shambadal will conduct a Berlin concert in Jochen’s memory on May 21.

« So, here’s how I get to play in the Berlin Philharmonic…