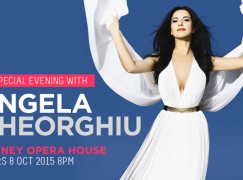 The Buenos Aires opera house has issued its own account of the events that prompted the Romanian soprano to storm out last week. We have shortened the text slightly for legal reasons.

Buenos Aires, Argentina, 8 March 2015 – The Argentine soprano, Virginia Tola, will sing the leading role of Adriana Lecouvreur in the opening night of the 2017 season of the Teatro Colón, replacing Angela Gheorghiu, who refused to agree to the contract terms offered by the administration of the theater.

…Having agreed to arrive in Buenos Aires on February 27th to begin rehearsals on March 1st. Angela Gheorghiu arrived on March 1st instead, and retired to her hotel suite for three days, during which time she was silent, refusing to attend rehearsals, costume fittings or to communicate whatsoever with the administration of the theater. She remained cloistered in her hotel throughout her stay in Buenos Aires, refusing to meet with any representative of the Teatro Colón…

Having agreed to the basic terms of her engagement via a letter of agreement, issued in October 2016, Gheorghiu arrived in Buenos Aires without having signed the contract issued by the Teatro Colón and delivered to her manager. On March 3rd, the administration was informed by the manager that Miss Gheorghiu required changes to the contract. The administration was able to grant her requests with the exception of her insistence that the universally utilized force majeure clause be removed. Such clauses are required by city regulation to protect all parties against acts of God, war, and civil tumult. Miss Gheorghiu’s refusal to sign the contact, coupled with her unwillingness to participate in the collaborative artistic preparation of the Adriana Lecouvreur, caused the administration of the Teatro Colón to cease contract negotiations and present Virginia Tola as Adriana Lecouvreur in the four performances originally offered to Miss Gheorghiu.

Sicklist: Conductor and soloist drop out on LSO »