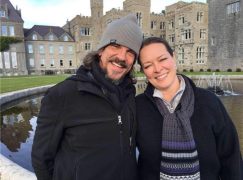 London’s US terror victims run a music studio back home

Kurt and Melissa Cochran from Utah were visiting London to celebrate their silver wedding anniversary.

Kurt, 54, was hurled off Westminster Bridge during the terror attack and died soon after of head injuries.

Melissa suffered a broken leg and is expected to recover. Her parents live in London, serving as LDS church missionaries. A church spokesman said: ‘We express our gratitude to the emergency and medical personnel who have cared for them and ask for your prayers on behalf of Melissa and our family. Kurt will be greatly missed, and we ask for privacy as our family mourns and as Melissa recovers from her injuries.’