I don’t mind having Simon Rattle as a neighbour

Our diarist, quartet violinist Anthea Kreston, takes stock of her first year as an American in Berlin and decides that what her family really needs is … a house. Somewhere near the music director’s.

(Also where Mahler went to find a bell for his second symphony). Anthea has put in a bid:

I am on my way to Madrid. New repertoire  – Webern Langsamer Satz, Schumann 2, Beethoven 130 with Große Fugue – mixed in with a handful of old pieces. In addition, we have four new pieces to learn in the coming weeks – Shostakovich 7, Mendelssohn 44/1, Mozart 590 and Dissonance.

We were a part of a festival in Norway last week – nice to mix with others over the breakfast buffet or post-concert meals (one of which featured delicious reindeer – I am vegetarian – but the looks of satisfaction on the other musicians’ faces told all). From Tanja Tetzlaff to members of the Berlin Philharmonic, to folk musicians, late-evening meals around large, rough-hewn tables, nestled in the second floor of a half-timbered building, infectious laughter and fast new friends abounded.

With a 6 month sabbatical coming in May, my family has a time to reflect.  The quartet sabbatical was planned three years ago. When Friedemann tragically took his life two years ago, and with my joining a year later, the sabbatical was opened slightly, to allow for flow during those 6 months and a continuing deepening of our new, shared quartet sound and concept.  So we will play occasionally from May to October, but other projects have been planned – solo cds, tours, etc.

Last week, the day Jason came back from his 2 1/2 weeks in Japan and Korea, I was heading out the door to catch a train for that evening’s concert. Jason would be home for bedtime, and our babysitter was covering until then. As I slung my violin over my shoulder, and kissed the girls goodbye, I felt the urge to jump in the car and have a proper, American-style road trip. I quickly dig out our binder of “non-classical” CDs, grabbed some trail mix, and headed out the door for some loud car sing-alongs and pedal-to-the-metal driving.

As I headed out of the city, I stopped to fill up, and, for old-times-sake, got a large hazelnut coffee, some corn nuts, and some double mint gum. As I slipped in one cd after the other, I began to realize my quick cd grab somehow chronicled major periods of my life. My early teenage years – the Beatles “Abbey Road” and Cat Stevens. Curtis years – NAT King Cole “Love is the Thing” – which accompanied me through a late teenage almost-to-the-altar engagement to an older conductor. They Might Be Giants “Flood” – my post- Curtis life, including living on a commune in Oregon, and moving to Oberlin with my best childhood friend, who had just recently dropped out of college. Jeff Buckley “Grace” – again another boy-centered cd – my year with the motorcycle-riding tattooed violinist of an Irish Metal band. Then to Jason, my partner for these past 20 years – Rushmore soundtrack.

As the city receded in my rearview mirror, the countryside, so similar to the MidWest in many ways, created that feeling I was craving. A kind-of free-association, reflective and dream-state. The next morning, I woke very early, and headed back to Berlin, through the early morning mist.  I was eager to see my family, now whole again, and to reconnect. I had several revelations during the drive, one of which is the desire to find a new living situation for our family. Something quiet – a house – with a backyard. When I returned and we had our family meeting, it seemed like this decision could possibly be the final puzzle piece of our adjustments to this new life and country.

Tomorrow, we go together to look at a beautiful house in Zehlendorf. The realtor thinks we have a good chance – our papers are in order. A bakery and a lake in walking distance, and the sbahn to get me to work and airports. Simon Rattle apparently lives in the neighborhood. The next phase of our lives awaits. 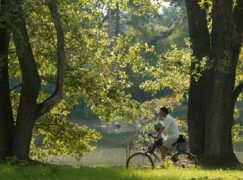