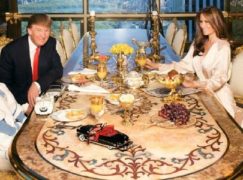 The realisation is dawning that when President Trump kills off the National Endowment for the Arts (NEA), Congress will never again have the guts to support culture with tax money, as it did under Lyndon Johnson’s presidency in 1965.

Here are a couple of instant institutional reactions to the Trump abolition:

Statement by American Federation of Musicians International President Ray Hair regarding President Trump’s Budget which eliminates the National Endowment for the Arts (NEA) along with 61 other government programs/agencies.

“I have said it before and I’ll say it again, eliminating the NEA is outrageous and unacceptable. There are orchestras, festivals and theaters in all 50 states that would be permanently damaged without NEA support. It is time for Congress to step up and do the right thing—safeguard the NEA by fully funding this priceless institution.”

Statement by Aaron Dworkin, dean of the University of Michigan School of Music, Theatre & Dance:

As part of the proposed new federal budget plan, it was announced on March 16, 2017, that the National Endowment for the Arts (NEA) and National Endowment for the Humanities (NEH) will be completely eliminated if approved by Congress. Funding for both groups amounted to just 0.003 percent of all federal spending in 2016, with each organization receiving approximately $148 million. Meanwhile, the nonprofit arts industry generates $135 billion in economic activity annually (spending by organizations and their audiences) that supports 4.1 million jobs and generates $22.3 billion in government revenue.

Aside from the positive economic impact realized by this small federal investment–which would no doubt increase with more funding instead of less–the NEA and NEH have a profound impact on the life of our nation; they support the heart and soul of our communities, the creative and intellectual backbone. The arts and humanities are key to innovation and inspiration, to understanding the human condition, and to addressing the complexities of our world. In addition, this small investment leverages private support from individuals, corporations and foundations to make even more impact.

In a country and time that is fractured by partisan dissent, the arts unite audiences in shared experiences, encourage civil discourse and engagement, thrive on collaboration, and celebrate diverse perspectives. And the humanities, in exploring the wide range of human culture, connect us to our past, help us understand our present, and inform us in planning for our future.

At the University of Michigan School of Music, Theatre & Dance, we are educating and training some of the country’s brightest and most talented aspiring artists and scholars in the performing arts. Fully aware of the career challenges that these young people potentially face upon graduation, we are also providing them with a robust program in entrepreneurship, to help them create their own opportunities and careers.

But even with this focus, the NEA and NEH will be critically important in helping our graduates share their incredible gifts to make a positive impact on society, because the NEA and NEH make the largest difference to the thousands of local arts and humanities programs across the nation. They are vital to the communities they serve-to organizations that introduce children to music, theatre, dance, and to other cultures … that engage our youth in after-school programs that funnel their energies into creative explorations and expanded horizons … that provide all ages with inspirational and stimulating performances, exhibits, lecture series, and more.

Trump dining at his gold-plated table