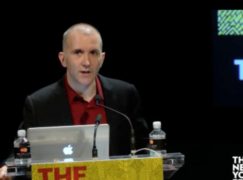 Alex Ross: Music criticism must not be measured in clicks

The New Yorker critic has launched a vigorous and thoughtful defence of his craft, which is under severe pressure at cost-cutting newspapers. Just today it was learned that the Guardian has cut back the contract of an essential theatre columnist.

Alex Ross acknowledges that ‘Criticism of any kind is increasingly unwelcome at the digital-age paper’. He reports mounting pressure on critics to make their reviews ‘more topical, more digestible.’

He adds: ‘Once you accept the proposition that popularity corresponds to value, the game is over for the performing arts.’

There is, however, a glimpse of hope: ‘In the wake of the 2016 Presidential campaign, with its catastrophic feedback loop of fake news and clickbait, people have subscribed in surging numbers to so-called legacy publications. Do these chastened content-consumers really want culture pages dominated by trending topics? Or do they expect papers to decide for themselves what merits attention? One lesson to be learned from the rise of Donald Trump is that the media should not bind themselves blindly to whatever moves the needle.’

This is a serious argument, one which should give encouragement to cultural readers and a moment’s pause to editorial axe wielders. Will it? Let’s hope so.

Report: The Met’s Traviata is making as much money as La La Land »