A piece of Mahler’s I had never heard before

I thought I knew them all, but last night Vasily Petrenko conducted the Royal Liverpool Phil in Mahler’s arrangement of Hugo Wolf’s prelude to his opera, Der Corregidor. I had never heard it played live before.

The back story is tragic. As fellow-students in Vienna the two composers shared a bed for several weeks, unable to afford a single. When Mahler became director of the opera, Wolf offered him Der Corregidor but was too unbalanced by mental illness to have a meaningful discussion. Mahler later staged the work after Wolf’s death.

The prelude is more Wolf than Mahler, and more Wagner than the two of them put together. A wave of Flying Dutchman comes out of a sea of Hispanic pastiche. There is plenty of colour in the prelude but it is bright and unyielding. Eight minutes takes a long time to pass.

The Phil followed up with a terrific Mahler 5. You can hear the concert Monday on Radio 3. 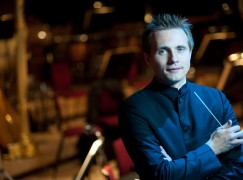