Musical Toronto has the story of how the town of Stouffville, Ontario, is trying for the longest musical event in the Guinness Book of Records.

Classical guitarist William Beauvais is among those taking part.

He writes: ‘I had just hit the coda, and doing a quick calculation in my head reckoned to be about thirty seconds from the end of the piece. The music unfolded and the ending arrived. Loud cheers from the stage manager, and those close to her, as much from relief as at the vigorous end to the piece. Going overtime would have meant the end of the record-breaking attempt. To that point, it had been an eight and a half day continuous concert with various artists.’ 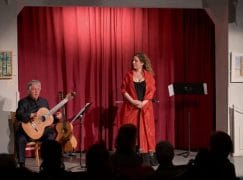 They’ll rename the town Stiffville when it’s over.