The hall was originally built by the piano manufacturer in 1901.

Tomorrow, on stage, Pierre-Laurent Aimard will play an 1899 Bechstein, specially restored for the occasion. 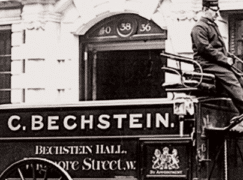 In the Hollywood walk of composing fame, Hanns Eisler is the forgotten man. Erich Korngold was the founding father, Waxman and Newman the busy bees, Rosza and Herrmann the atmosphere merchants. Eisler, who wrote the first book on composing for film and treated the craft as an art in its own right, is all but pushed off the sidewalk… 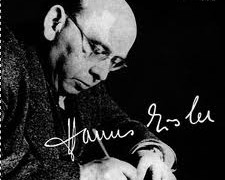 We have been notified of the death, from cancer, of Jonathan Strasser, after a richly variegated musical life.

He was a regular conductor with the  Orquesta Sinfonica Venezuela in Caracas and, nearer hme, music director of the Staten Island Symphony.

He was an accomplished violinist, and a teacher in the Precollege Division of the Manhattan School of Music.

He made a cameo film appearance in the 1980 movie, Fame.

One student writes: ‘Mr. Strasser was THE music teacher in NYC for all aspiring young musicians.’

The funeral is today at 11.30 at Riverside Memorial Chapel. 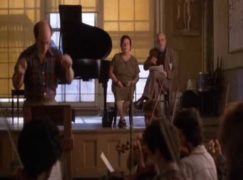 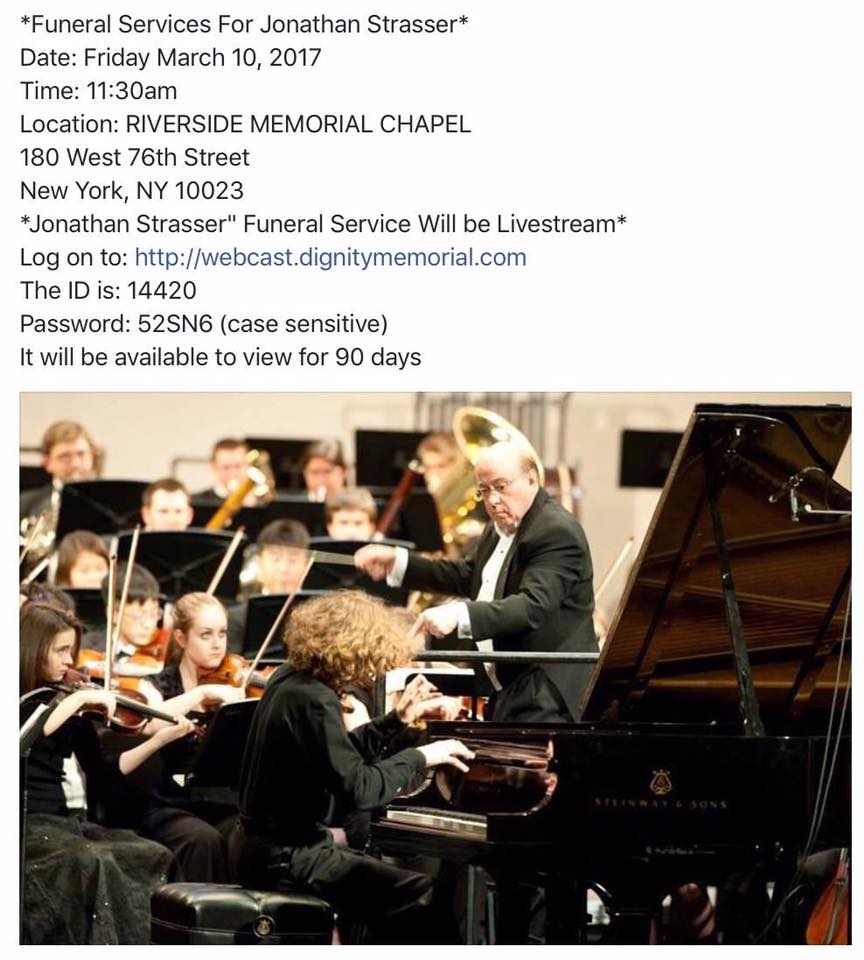 Our diarist Anthea Kreston has found one in Berlin.

I have been taking a parenting class at my daughter’s school these past months (I make it to about half of them).  It has been fantastic – but in unexpected ways. I have the best role model already at home – a partner who always acts from compassion, who naturally can get into another person’s skin and see things from their perspective. So most of the tools in class are already an integral part of our home life – but it has dramatically altered my thoughts on rehearsals, performance, and the relationship between performer and audience.

I once had a boyfriend who described playing the violin as “a series of small catastrophes”.  Somehow so apt, and also – isn’t that what parenting is?  Of course it is – but, just like playing the violin, one of our goals is to not let anyone notice if we are struggling, or show any reaction to a mistake we have just made. Keep a straight face – don’t let on!

The other day, we workshopped the contrast between an emergency child situation (such as a meltdown) and our personal aspirations of what our child would be like if they walked in the door in 20 years. What do you wish for?  A confident, caring, intelligent adult who is adventurous and open?  Whatever your wish, the point is to take a step back from the immediate situation and then react in a way which will foster the long-term goals you have for your child.

I was recently teaching again at Chapel in Brussels, and was having difficulty breaking through the series of catastrophes with an excellent quartet working on the last Beethoven quartet (op. 135). I decided to stop, have everyone put down their instruments, and together we made a list of what we wished for ourselves as musicians in a concert. Then we made a list of our expectations as audience members. We looked and noticed what was the same, what was different, and how to reconcile the two.  Here are the two lists.

Expectations of ourselves in concert:

Connection between colleagues as well as with the audience, freedom (balance between control and abandonment), finding flow, challenge and success, self- and other- forgiveness, true honesty, knowledge of composer and historical context, humility, confidence

Expectations as a concertgoer:

I was sitting with an audience member at a post-concert meal last week, and found out this person was not a musician. I was curious – what did he get out of the concert – what were his expectations?  He said, simply, pleasure and surprise.

There are many similarities between these two lists of expectations – but it is easy to forget these goals – to forget that there is a big obligation on the part of the performer towards the audience.  They have made a big commitment to attend a concert, and we must escape our “series of catastrophes” and aim higher, aim deeper.

Then, we talked about what the slow movement of that quartet meant to us. The amazing thing about that last Beethoven quartet is, despite the thorny and quite unpleasant life that Beethoven lived – his terrible relations with his family, constant fighting with patrons and everyone in general, his struggle with deafness, never finding love (also his legendary hygiene issues – reminds me of myself at age 18 – I once woke up in my clothes from the day before and found that I had slept on a piece of pizza all night). This last quartet is so lovely, so light, so forgiving and generous.

We talked about the end of life, what we want for each other, how we want to die. In some ways this Beethoven quartet is a testament to compassionate end of life. Total acceptance and freedom – optimism and sweetness. The slow movement is so tender – yet so different from the heaviness of the Cavatina. We tried to describe it. I eventually described it as an unexpected gift – a person who you loved so dearly – and for some reason, after they passed away – you are allowed one more day to spend with them, just together, just one last day.

The quartet gathered their instruments, and sat in a tight circle, facing each other. They then began to play the most incredible thing I have heard – and I found myself crying (as I am, actually, as I write this now).  After we were done, we were quiet for some time, and I thanked them.

As we were packing up for the day, I realized something – it was like that was Beethoven’s way of always being with us. A chance to know him, to be alone with him one more time. I am so glad that he was able to leave this world with forgiveness, acceptance, and love. He is, like all of the great composers, an integral part of my every day life, a member of my family.

Two years ago, we reported the story of Katie McAdam who, preparing to sing Madam Butterfly at London’s Holland Park Opera, was forced to give up her career by vocal health issues.

A year later Katie told us, ‘I miss it every day’.

Another year on, she has found fulfilment in a new vocation – as a construction site manager.

Read how that happened here. 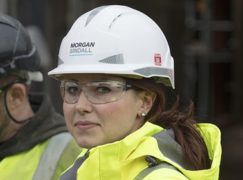 The Pacific Symphony, which has been out of contract for six months and almost went on strike, has settled its differences with the musicians. 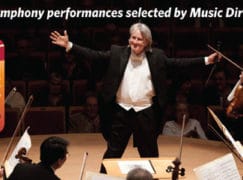 London is some way behind, apparently.

A survey by Boston Consulting Group, finds that the music industry contributes $21 billion to New York’s economy, accounting for 60,000 jobs, and a $5 billion wage bill. 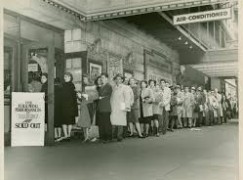 DIRECTOR OF MUSIC FOR HER MAJESTY’S CHAPEL ROYAL, ST. JAMES’S PALACE & TEACHER OF MUSIC AT CITY OF LONDON SCHOOL

Reporting to the Director of Music, City of London School and the Sub-Dean, Her Majesty’s Chapels Royal, the postholder will be responsible for the performance, training and welfare of the Chapel Royal Choir, St. James’s Palace which consists of ten boys and six men.

Supported by a Sub-Organist and Administrator, the Director will be responsible for the preparation and delivery of music for the Sunday Service at the Chapel Royal, St. James’s Palace and the Services on the following days:

There may be additional performances on an ad hoc basis depending on the ceremonial requirements of the Royal Household: (eg. Weddings/Funerals/Baptisms/Special Services).

As a member of the Music Department at City of London School, the person appointed will be asked to teach curriculum music to students, as determined by the Director of Music. They will take rehearsals and accompany students when appropriate. They will also be required to undertake general School duties as required.

The postholder will hold an Honours Degree in Music and preferably the Fellowship of the Royal College of Organists.

They will also have proven experience of working as a Choral Director and dealing with children in a choir environment.

Experience as a composer and arranger would be appropriate as this will continue the great tradition of previous post holders.

An application form and further details are  available from the School on 020 3680 6328 or e-mail the HR Advisor at: recruitment@cityoflondonschool.org.uk

Nicholas Carter,  principal conductor of the Adelaide Symphony Orchestra, has been named chief conductor of Stadttheater Klagenfurt, a medium-sized company in Carinthia.

Carter, 31, assistant to Simone Young when she was GMD in Hamburg, moved on to work with Donald Runnicles in Berlin. 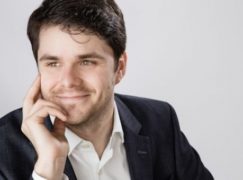 He has renewed with Adelaide until the end of 2018.