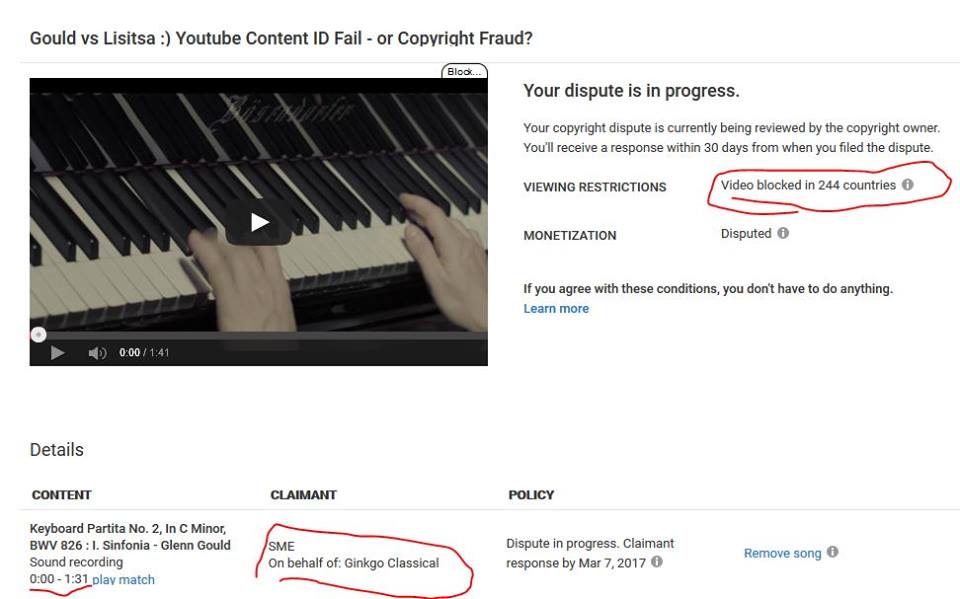 Barely had the video gone live on Youtube than Sony Music Entertainment issued an opportunistic takedown order, claiming the video was the work of Lili Kraus, who died in 1986.

Apparently, this is common practice at Sony. The companyy recently blocked a Valentina Lisitsa video, falsely claiming it was the work of Glenn Gould.

Lisitsa wrote: Here are 90 seconds Sony Music Entertainment claims is an EXACT match to Glenn Gould’s rendition of Bach Partita #2. So exact, that they have blocked mine in 244 countries. Repeatedly.

What you hear is not a humorous “shred”, it’s two soundtracks superimposed – mine and Gould’s.

I synchronized the beginning of the clip exactly from where the claim starts. Does SME and Youtube’s ContentID really think it is identical? As you can well hear, the tempo is not the same the rhythm is not the same…. The clip gets out of sync from the very first second. It gets “together” for a moment somewhere in the middle.

I hope this example will be of use for those youtubers who fight daily to remove abusive claims placed by big corporations. And I hope someone gets sued so the abuse stops.

Death of ‘the first girl to play bebop piano’ »