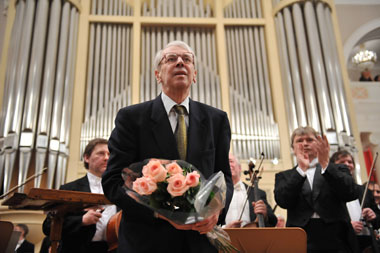 Show me a conductor with balls

So many Russian composers of the Shostakovich and post-DSCH era have suffered from the timidity of music directors – their reluctance to propose or perform great music by unfamiliar names.

Weinberg is the premier casualty.

Try as I might, I can’t stop listening to these late works of a Russian composer who was close to Shostakovich but never tried, as others did, to imitate him. The eighth symphony, written in 2008 when Tishchenko was mortally ill, draws the ear into an eerie landscape of ghosts, trolls and spooks, weird and possibly political. The composer thought it might make a good companion piece to Schubert’s Unfinished Symphony. He was right: it would. But where is the conductor or orchestra manager that dares to do such a thing in timid 2017?