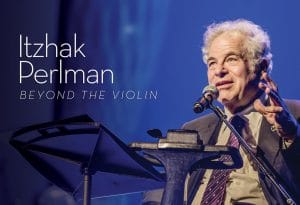 Itzhak Perlman: I grew up on care packages

The violinist has authorised publication of his speech on receiving the Genesis Prize.

Here’s how he begins:

When I was growing up in Tel Aviv, my parents were poor, and to get enough food was a constant challenge. I remember care packages arriving from an aunt in Toronto: home-made chicken soup in a jar, a can of Del Monte fruit cocktail with that red cherry, and a check for a few dollars. We were recipients of charity. We were on the other side of giving. We were receiving.

Besides the constant struggle to survive there was always at in the corner of our tiny apartment a “push-kele” for the Jewish National Fund. My parents would put in a penny or two when they could spare it. Giving tzedakah was a way of life, whether you could afford it or not. It was tradition. It was what we do.

It’s funny. Even though my circumstances have changed since I was a poor kid in Tel Aviv, those two childhood lessons still inform my life. I remain focused on getting enough to eat and the act of giving tzedaka. It won’t surprise you that I have little trouble these days finding enough to eat. The moral obligation to give charity is one that I take seriously.

It is a lesson that we Jews learn early. It starts in nursery school and continues until the day we die. Sometimes even after that. Somehow I know that after 20 years in the ground, I’ll still be getting requests from the United Jewish Appeal. “Itzhak, answer the phone! We know you’re there!”

« Lincoln Center has failed the arts