How was Pretty Yende in Puritani?

Since the NY Times did not bother to review the Met’s late replacement for Elvira, here’s Zeal NYC’s report: 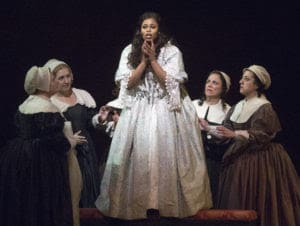 Camarena’s Arturo was every bit as good as expected, but Yende’s Elvira was spectacular in every way. She had only sung the role once before, in a non-traditional production last year in Zurich. It was a triumph for her, and Tuesday night’s performance, in a staging that could not possibly have been more different, has to count as another.

As singing, it was not perfect—Yende has something of a beat in her voice that takes a little getting used to, and she sometimes merged with the orchestra when she should have been floating above it—but as musical expression, it was peerless, and as a progressive revelation of character, it was meticulously thought-out and deeply convincing. Her acting was psychologically acute…