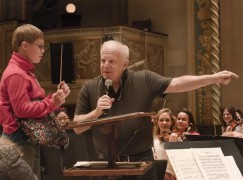 A music director is criticised for mentioning ‘alternative facts’

Leonard Slatkin has received a hostile letter from Detroit Symphony audience members after observing, in a comment on Mozart’s disputed Sinfonia Concertante for Four Winds, ‘We do not want to confuse you with alternative facts.’

Next day, this came in from offended patrons:

Last night, conductor Slatkin, whom I have always had the utmost respect for, ruined the evening for me and may have dissuaded me from attending any further concerts.

If you were unaware, he began the concert with a monologue (“joke?”) insulting our president by referring to his “alternate facts.” I am sure he thought he was a hit based on the applause and the laughter. However, he could not hear the half of the theater that was not laughing or applauding. He single-handedly insulted and offended half of the audience which paid good money to enjoy the concert.

Slatkin reflects: ‘I have tried all my life to avoid combining music and politics. But perhaps the time has come to begin to speak out more forcefully. I know that the threatened elimination of the NEA as well as privatization of NPR are subjects on which I must voice my opinion.

Our country was created on the principle of free speech. We all have the right to say what we feel, and those who believe otherwise are basically undermining the founding fathers.’

« How Dallas is boosting women conductors