Extraordinary but true: Britten’s other maritime opera has never been seen before at Snape Maltings.

Other highlights of the 2017 Aldeburgh festival: 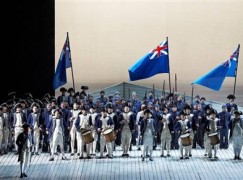