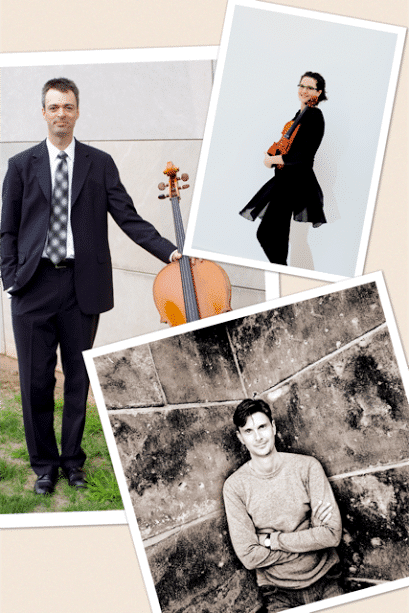 A year after joining a string quartet, I’m starting a trio

This week marks the one year anniversary of my audition for the Artemis String Quartet. When I think back to it – that final Skype meeting where I was asked to come to Berlin on two week’s notice, to prepare 6 works for a two-round audition – I was exhilarated and in shock. Sitting in our beautiful 1920’s craftsman in our small rural town of Corvallis, Oregon, I cleared my schedule, and we picked up and moved into Jason’s parents house for the next two weeks, so I could have the time and space to prepare. I needed someone else to clean and cook – to watch the children (ages 3 and 6), a library to copy music from, a good night’s sleep. As the mom of two little girls, my preparation was nonetheless done with many interruptions, and frequently with a three year old clinging to my leg. But I knew I could do it, and so did my family. This week, my quartet lifted our glasses to that week – a culmination of a 7 month search for their fourth member – and the beginning of a new life for all of us.

This week, amidst a heavy schedule preparing new works for quartet, and with two additional quartets to be started Monday, my new String Trio (Humboldt Streichtrio) makes its official debut in Berlin. Volker Jacobsen, the original violist of the Artemis Quartet, and Jason Duckles (cellist and husband) join me in a program this Sunday, and NPR Berlin will be there to interview and fill out a story they are working on. In two weeks time we are playing at the fabulous new hall in Hamburg – Elbphilharmonie – as a part of their opening season. This incredible structure – situated on an island in the city, perched atop an old brick warehouse – looks like a gigantic floating silver ship. I have just heard that the concert is sold out.

I know that it might seem a little crazy to start a new group, or even to continue playing with my piano trio (Amelia Piano Trio), considering the fullness of the quartet schedule.  But – I also know that there are dangers in our decision to move here, and I am working to anticipate and avoid common pitfalls. One of these possible pitfalls, as a quartet musician, is to relinquish yourself fully to the ensemble. Playing in a quartet is similar in some ways to being in an obsessive, co-dependent relationship. You get sucked in, it becomes your world – your circle of outside friends can dwindle. Because I have experienced this before, I wanted to head this off before it could even begin. That is why I have reached out, played with others here casually and professionally. I need a frame of reference, a mixed bag.

I first met Volker at Juilliard when Artemis and Avalon were working with the Juilliard Quartet. He was hilarious – a big laugh and a physical ease, and quick with his quirky humor. Several year later, Jason and I met up with him again in Bavaria, and shared a string of nights drinking and laughing in the Ratskeller in Schloss Elmau, as a part of a music festival for ARD winners. When our manager Sonia Simmenauer called with a possible string trio concert earlier this year, Jason and I immediately asked Volker, and our new little trio was born.

I can say that these upcoming concerts make me significantly more nervous than quartet concerts. The parts for string trio are technically very challenging, exposed, and soloistic. I have to be front and center. There is nowhere to hide (not that hiding is in my nature), and I have extremely high expectations for myself. Intonation and balance is a whole different ball game compared to piano trio or string quartet. I really like playing with Volker and Jason – they are love-able and easy-going, and let me be free and a little crazy. More than once, our rehearsals broke down into a fits of spontaneous laughing, tears flowing with our guffaws.

So tomorrow, after quartet rehearsal, the three of us will spend 2 and a half days together, reworking, performing (house concert and debut concert), and developing our new sound. And also having a pint or three.

« When did you last take the back off your piano?

A year after joining a string quartet, I’m starting a trio »