City Opera *is* NY. The Met just happens to be there

A gauntlet has been thrown at the Met by Michael Capasso, general director of the revived New York City Opera. He’s speaking to ZealNYC:

City Opera is the ‘people’s opera.’ By comparison, the Met I think of as the United Nations, it belongs to the world but it just happens to be in New York. The Met is a large, international, fantastic opera company. But it’s not uniquely a New York institution, it’s a world institution.

When I look at programming for City Opera, I think of our success in the past and in particular the way that Maestro Rudel would program. He would sell out performances of Carmen and Bohème on the weekends and put obscure repertoire like The Boy Who Grew Too Fast or Street Scene mid-week. He used warhorses to pay for his obscure opera habit.

So our City Opera can be much more of a New York institution and our programming, in keeping with the City Opera tradition, will be some standard repertoire and more contemporary and American opera. 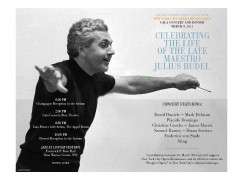 We program Candide which has a great track record for the company and we follow it with a Respighi opera that hasn’t been performed in New York in eighty years. A very City Opera type piece of programming.

Angels in America comes in June and it’s no mistake that we’re doing it during Pride Month, a commitment to doing a gay themed opera in Pride Month going forward.