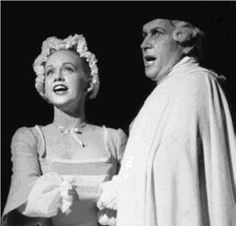 60 years ago tonight, this overture brought Broadway to a halt

Leonard Bernstein’s Candide opened on December 1, 1956 and the overture brought the house down.

ZealNYC have put together a pack of interviews with surviving participants, starting with Barbara Cook, who played the role of Cunegonde. She says:

I am extremely proud to have been part of the original cast of Leonard Bernstein’s Candide. I have two distinct memories of opening night in New York, December 1, 1956 at the Martin Beck Theatre. First is that the overture stopped the show — people loved it, and to this day it’s one of the most frequently played pieces by symphony orchestras around the world. My second big memory from opening night was Lenny coming backstage to wish me luck. He was just about to leave when he added, “Oh yes, Maria Callas is out front.” I said, “Oh my God, I could have done without knowing that.” Lenny laughed and said “Don’t be ridiculous. She’d kill for your high E-Flats.”

Alfred or Russell – who’s your countertenor of choice? »