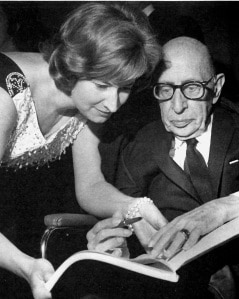 Wieland Wagner’s Fricka has died, at 88

A member of the Hamburg State Opera from 1960 to 1993, the contralto Ursula Boese sang a variety of roles at Bayreuth from 1958 to 1965, notably Fricka in Wieland Wagner’s last Ring cycle.

As a guest artist, or as part of the Hamburg ensemble, she went on to sing on all the world’s major stages, from Salzburg to the Met. Probably her starriest moment was a 1973 Ballo she shared in Hamburg with Luciano Pavarotti and Sherill Milnes.

Ursula Boese with Stravinsky after a 1963 Hamburg performance of Oedipus Rex. (Photo: U. Boese)

You can’t do it in 5 minutes: 25 crackpot facts about classical music »