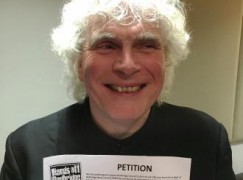 Simon Rattle learns that London will not get new concert hall

The Theresa May Government has withdrawn from a proposal to build a new concert hall in the city of London, replacing the unsatisfactory Barbican, it has been announced.

The reasons given were cost and lack of need. The projected cost was £278 million pounds, though some experts predicted half a billion, given that new concert halls rarely come in on budget. Both Paris and Hamburg, among recent new builds, cost two or three times the initial estimate.

A government statement said: ‘London is already home to world class culture and music venues, from the iconic Royal Albert Hall to the Barbican Hall and the Royal Festival Hall at the Southbank Centre.’ That seems to indicate that the capital cannot expect any change on the music scene in the forseeable future.

The proposed new hall had been sold to the former Chancellor of the Exchequer George Osborne as the price of bringing Sir Simon Rattle to London as music director of the LSO. The plan was backed by the former Mayor of London Boris Johnson and by the City of London, which offered the site of the former Museum of London.

The loss of the hall does not necessitate any change in Rattle’s immediate plans: there is no worthwhile vacancy for him at present. It may, however, mean that his tenure with the LSO will be shorter than foreseen.

Slipped Disc has argued throughout that a new hall in the heart of the City represented no added value for audiences, at an unaffordable cost and at the wrong moment in national affairs. London needs a modern hall, but there has to be wider public consultation and consensus before it is approved, probably in a different part of town.