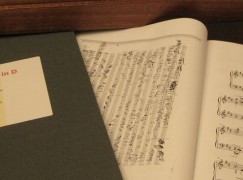 On the Today programme this morning, Professor Barry Cooper of Manchester University claimed that a Beethoven manuscript being sold at Sotheby’s today is not an original, but a copyist’s transcription.

Cooper, renowned for making a completion of Beethoven’s ‘tenth’ symphony, told the BBC that he had found ‘inconsistencies’ in the Allegretto manuscript. His ‘hunch’ is that it was ‘copied shortly after it was composed’.