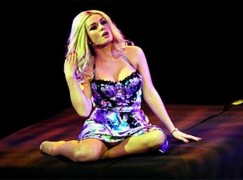 Katherine Jenkins gets to sing at ENO

The lead roles in the Rodgers and Hammerstein musical will be taken by the tenor Alfie Boe, who has sung opera creditably on the Coliseum stage, and Katherine Jenkins, the ‘opera singer’ who has never sung a full role of anything before. This is, supposedly, her stage debut.

It’s a ‘semi-staged’ production with the ’40-strong ENO orchestra’.

« What it was like to be a good American

Injured soprano will sing Lucia from a wheelchair »