How many women in the Vienna Philharmonic? 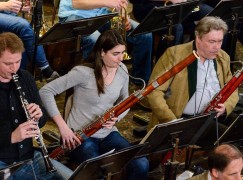 The old barrier is well and truly broken.