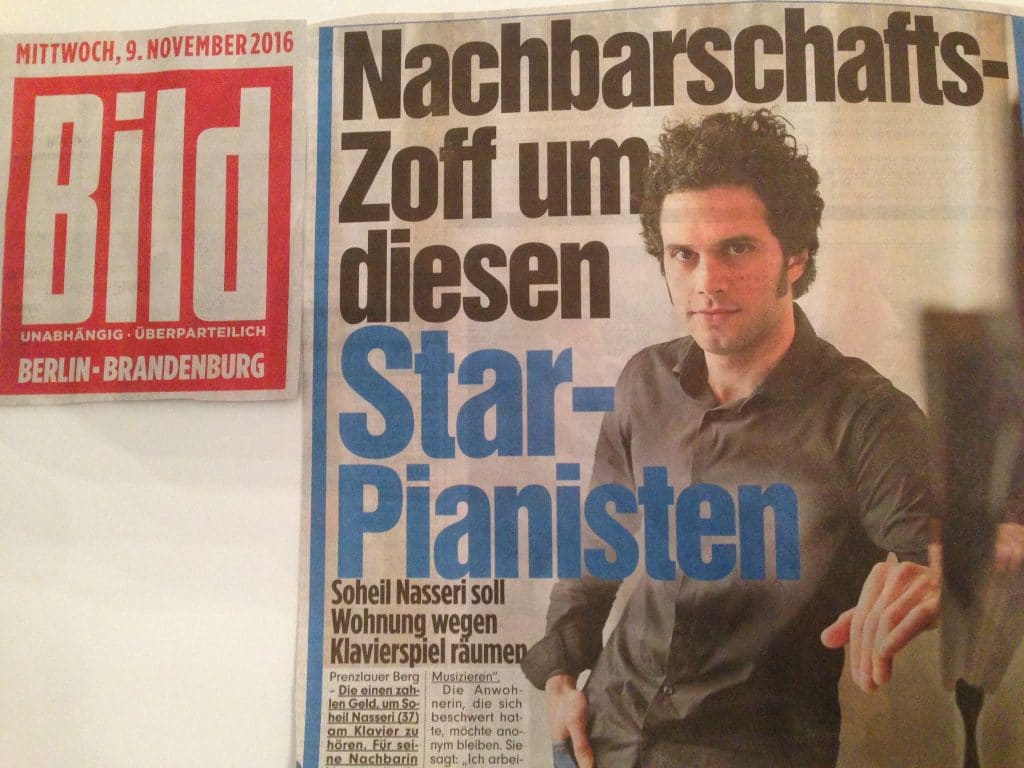 Homeless in Berlin: Neighbours force US concert pianist out of his home

The pianist Soheil Nasseri has been given 13 days to leave his apartment after noise complaints from neighbours.

He has a recital coming up next week in the Philharmonie. Can anyone offer him accommodation?

I will still be playing my solo concert next Wednesday in the Berlin Philharmonie, even if I am homeless! How can anyone be expected to move out within 13 days?

Here’s a translated report from Bild:

NEIGHBOUR TROUBLE FOR PIANO STAR!
Soheil Nasseri has been ordered to vacate his apartment due to piano playing.

Photo caption:
Pianist Soheil Nasseri (37) has played in Carnegie Hall and performs next week a solo recital in the Berlin Philharmonie (Gershwin, Schubert, Beethoven). He has trouble at home.

Prenzlauer Berg – Some pay money to hear Soheil Nasseri (37) play the piano. But to his neighbour, classical music is just noise.

Schönhauser Allee, the Kulturbrauerei corner. Soheil Nasseri lives off the second courtyard, in a 700-Euro-per-month 850 square foot apartment. The American pianist is a star who performs time and again in the Philharmonie. He moved to Berlin in 2007. Mr. Nasseri says “Berlin is the cultural capital of the world. Berliners love classical music.”

Apparently not his neighbor, though…

She complained about the piano playing and the landlord GWD reacted by sending Mr. Nasseri a notice of eviction – for “repeated disturbance of the peace via your multi-hour music making.”

The complaining neighbor asked to remain anonymous but told us “I work at home. I do feel sorry for him but a piano is unacceptable!”

Mr. Nasseri can’t believe it, but doesn’t want to leave: “My neighbors all have my cell number and I ask regularly if I am disturbing them.” He insulated the walls with thick curtains and the floor with a heavy rug. “And 93% of the time I practice in a church. I only practice occasionally at home.”

Other neighbors are on his side. Martina Keyser (59): “Many neighbors are loud – in contrast, Mr. Nasseri is very considerate. He keeps the windows shut when he plays!”

The landlord GWD declined to comment to BILD on the matter. Mr. Nasseri is supposed to turn in his keys today or eviction looms.