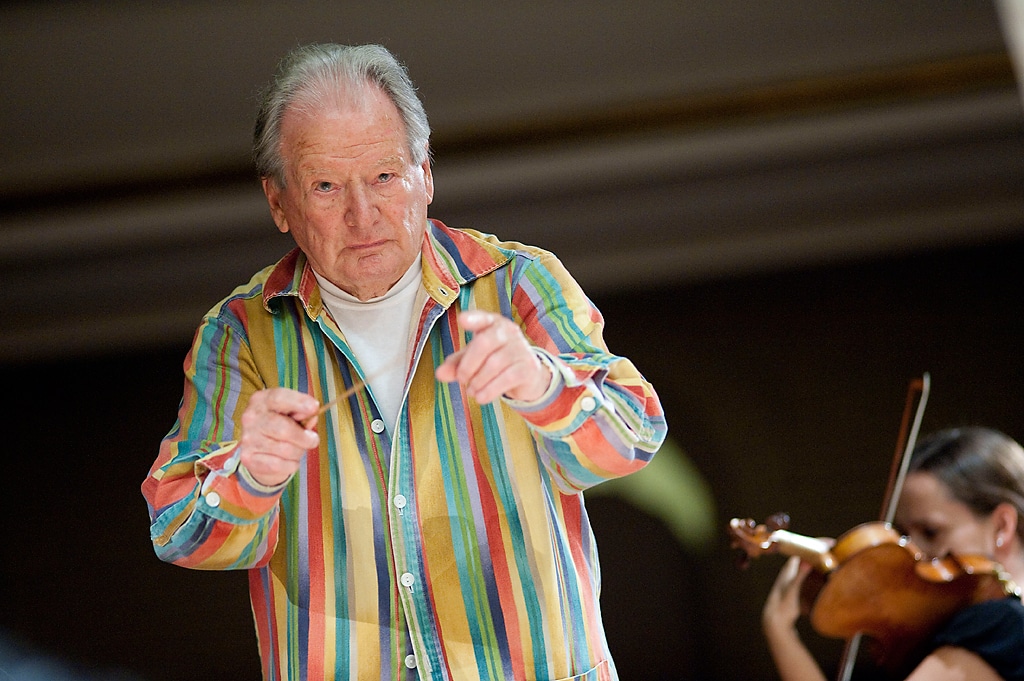 Glimpses of the unforgettable Neville Marriner

I am sitting in our favourite Kensington lunch place waiting for Neville when he breezes in, carrying a bulging briefcase that has seen better days. ‘So sorry I’m late,’ says Neville, who isn’t. But he is always courteous and considerate and if he sees me sitting down he assumes he must have been at fault.

‘Not really your thing.’

‘Never done it before. Was studying it on the Eurostar this morning.’

‘Neville,’ I exclaim, ‘You’re 90 years old… what are you doing learning new pieces?’

‘Oh, a friend is starting a new orchestra and desperately needed someone to conduct it. I couldn’t really say no.’

That was Neville through and through, the man who would never let a friend down, who took every work of music on its merits and remained ever curious as to what a new score might contain.

Once we got talking, the food could wait. He might remember trying to get Elisabeth Schwarzkopf to follow his beat, or how he joined the Philharmonia intifada against Herbert von Karajan, or something that Alfed Brendel had just showed him in a Mozart manuscript. He was an irrepressible fount of memory but, unlike so many others, he was both modest in his own part in the story and deeply interested in the person he was talking to – me, in this instance.

I once asked him how he suffered the war wound that landed him in a hospital bed next to Thurston Dart, the mathematician who first showed Neville the possibilities of period pitch and tempo. We were sitting in his Kensington flat. It was a summer evening and there was an empty bottle of red wine on the coffee table between us. I said very little and let Neville talk.

Soon, we were in pitch darkness. I looked around to find a light switch and saw Molly, his wife, hovering at the door, signalling me not to move. Neville had been part of an advance party that recce’d the Normandy beaches a few days before D-Day and was lucky to get out alive. Molly had never heard the story before. Neville was too modest to let on. (In some versions of his life he said he was invalided out by a kidney ailment; the ailment was sharpnel and he spent months in hospital.)

He loved orchestras, couldn’t get enough of their gossip and intrigues while always respecting the players’ craft and commitment and never indulging in malice. Those who fell out with him – Christopher Hogwood, for instance – found themselves embraced in reconciliation. So many musicians, down in the dumps, were picked up and set on their feet again by the ever-patient Neville. I can’t believe he is gone.

The last time I saw him, he was working around the corner at Abbey Road and I decided to drop in and surprise him. His face lit up at the sight of me and he made me promise to stay ‘for a bite of lunch’.

It was a commercial session with the Academy of St Martin in the Fields, paid for by the soloist. After a couple of decent takes, good enough for a commercial job, Neville tapped his baton on the stand and said, ‘I think we can do better than that, don’t you?’

Backs straightened in the orchestra, pages were turned back in the score.The next take was a manifold improvement. That was Neville: ‘I think we can do better than that.’