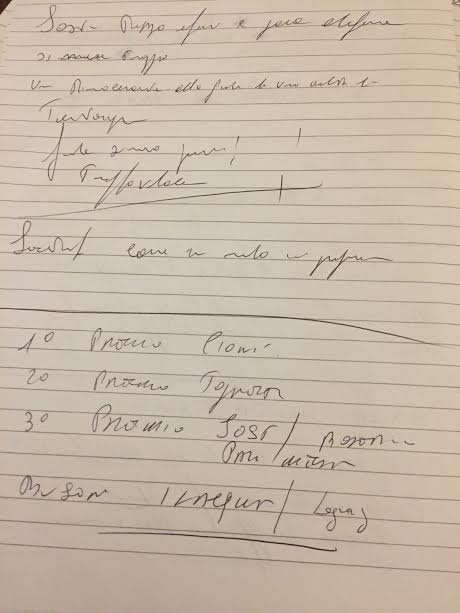 This is one of those tales of misery that arise from time to time in the lower reaches of the competition industry. We have received this complaint from a scandalised Korean contestant, Jehi Bahk and post his account verbatim. It should serve as a warning to young hopefuls never to attend an unonwon competition, no matter how famous a name it bears.

Please be aware that this is a conducting competition, not the esteemed Busoni Piano Competition.

About two weeks ago I travelled to Italy to participate in  the“International Conducting Competition SilVer 2016 – Ferruccio Busoni”, organised by the “Associazione Culturale Silver”.

I got invited on October 16th by e-mail and had to transfer the participation fee of 270 EUR (additional to the application fee of 50EUR) to the personal account of Alessio Cioni, via Western Union or Moneygram.

On October 18th the participants got an e-mail with the exact location – first announced as the Teatro di Vinci it was changed to a small church – and the names of the jury:

After the first round, most of the better conductors were eliminated, a significant part of the participants who advanced to the second round were those who attended Lanzetta’s masterclass this summer, which I found out later.

During the competition, the repertoire was changed (Shostakovich concerto was cancelled, Busoni Piano concert was no longer compulsory). In the semifinal, Lanzetta wanted every contestant to sightread. He handed out music and every contestant had to conduct about 2 minutes from, as we knew later, Suk Serenade and Nielsen Suite. Totally out of the regulations.

Now the culmination of the scandal:

The location of the competition was in a small church in Empoli (Chiesa di Santo Stefano degli Agostiniani, Via dei Neri, Empoli). After the final concert, on the way to the toilet (you have to go through the side room of the church to get to the toilet) I saw a note lying openly on the table, which shocked me so much, that I had to take a picture to have a proof of it:

Joost Smeets, one of the 3rd prize winners, who also saw the note and also took a picture of it, (and got very angry about it – he throw away the small cup, which he got as a prize, into the trash container outside the church) got a message from Lanzetta which led to following exchange of messages (Lanzetta during the communication admitted that he wrote the note as “as a joke”): (see 6 screenshots with messages)

after your misconduct and unprofessionalism towards the Organization and serious offenses against the President of the Commission at the end of the Competition, the Artistic Director together with the President of the Association and with M ° Lanzetta are deciding to cancel prizes and concerts.By the time the check of the prize has been blocked from the bank.

We will keep you informed.

« Concertmaster waves Zubin’s baton to save the night