Four weeks ago I was attacked in Ion Gardens off Columbia Road as I was walking home. I visited the site yesterday with my sister, where the council have since installed new street lamps across this little park. In six years in the East End, I’ve felt safer here and in London generally than in most other towns in the country.

The group of four took everything I had, passport, phone, computer with valuable work, concert clothes and scores, before attacking me with a mace and/or knuckle dusters leaving multiple fractures in the eye socket and cheekbone.

The NHS are a national treasure: Prof Simon Holmes rebuilt my face in an amazing operation which he has demonstrated on the BBC’s An Hour to Save your Life, for the distinctly unsqueamish. The result should mean a return to full sight and health in a few months.

Victim Support and Saving Faces are fantastic. As are my friends. And family.

Over the past two days, many of you have contributed towards a justgiving fund set up by my friend Nazan. If she had asked me first about setting up this fund, I would have said no – I find it difficult to ask for help from friends, and almost as difficult to accept it. Due to her initiative, the response has overwhelmed many of us, and the fund she set up will now recover the items stolen during my attack.

More than this, of course, your thoughts and messages have brought comfort – I will try to write to everyone over the coming weeks. As musicians, we live wonderful and perilous existences. Our bodies are our instruments and vessels. This attack came at a time where I also hadn’t played the piano seriously for 16 months, cancelling a hundred-or-so dates. It hasn’t been easy to talk about this publicly, as much as anything for fear of losing future work. It has become a little easier with a shift of focus towards conducting and composing.

Others know better than I how to be open and humble about struggles; to facilitate help for others where we can, as Nazan and each of you have done for me. That this has happened against the backdrop of the loss of one of my family’s dearest friends shines another light on the preciousness of today. So I will learn to accept your generosity, and try to live with the same spirit I’ve been shown.

So far, more than £10,000 has been raised to help James’s recovery. Please give here, if you can. 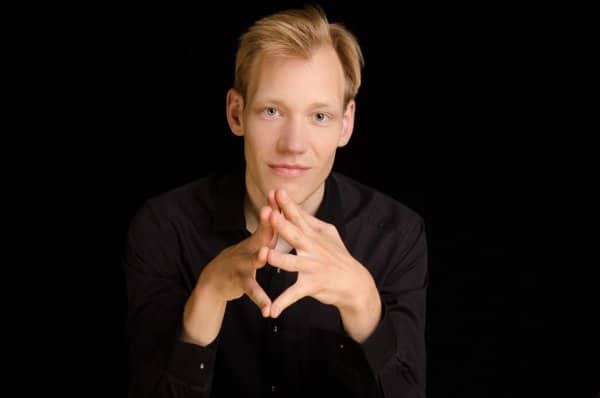 James studied at Trinity College Cambridge, the Guildhall School of Music, the Georg Solti Accademia and the Franz Schubert Institut. He is a winner of the Royal Overseas League Piano Competition and the ROSL award for accompanists, Das Lied International Song Competition, the BBC Performing Arts Trust, Award for Young Concert Artists and Gold Medallist at the Marcello Galanti International Organ Competition. His recordings have won awards from Gramophone, BBC Music and International Piano Magazines. James is a Fellow of the Guildhall School of Music & Drama, a Samling Artist and Director of Music at Hampstead Parish Church.