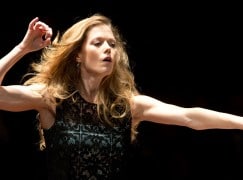 The French label Alpha has got in first to record the Canadian soprano in her other role as conductor, for release next year.

From the press pack:
With the Amsterdam-based orchestra LUDWIG, of which she is associate artist, Barbara Hannigan has devised a programme including Berg’s Lulu Suite and Gershwin’s Girl Crazy in a Suite newly arranged by the multi-award-winning American composer Bill Elliott. To complement these two pieces, she has recorded Berio’s spectacular Sequenza III for solo voice.

…This album, entitled Crazy Girl Crazy, brings together the character of Lulu, a key role in Barbara Hannigan’s career, the heroines of Gershwin’s musical comedies and their famous songs like ‘But not for me’ and ‘I got rhythm’, and Sequenza III, that incredible musical sculpture built from words and the human voice: the result is an album that forms an evocative musical portrait of the artist.

« The passing of Dario Fo

Just in: Blackadder gets his trumpets back »