A quartet with only one player left standing

Our weekly bulletin from Anthea Kreston of the award-winning Artemis Quartet: 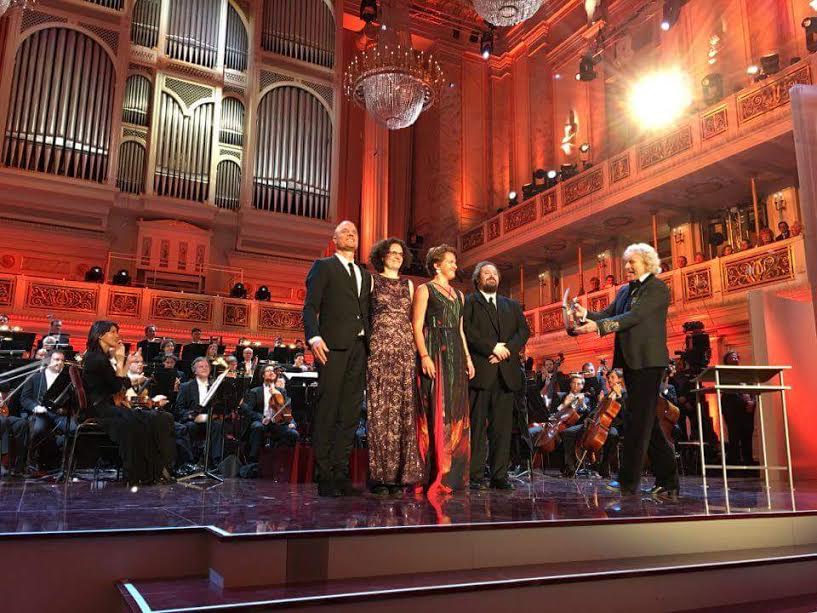 We have had a week of illness – first me, then our first violinist was ordered to stay in bed for the week) and now our violist (standing next to me, waiting for security at the airport).  Most immediate family members are down as well.  A week of cancelled rehearsals buttress the Echo Awards (European Grammys) and performances. A member falls into a desperate, heavy sleep during intermission of our concert, to be gently shaken awake for the second half of the program.

The last to fall (or not to fall) is our cellist, who has surrounded himself with ginger tea.

In the thick of all this – a behind-the-scene look at the glamorous and magical Echo Awards – from my first red carpet walk to rubbing elbows with classical music’s elite.

Pre-show, abundant emails and detail-checking set my expectations high – this was going to be a spectacle – visually, musically, and star-studded. Because of security, we were asked to arrive first one hour, then an hour and a half early, with official identification. A car was sent to my apartment 2 hours before we were to be seated, and my sister, visiting from Berkeley, accompanied me as my plus-one.  She came prepared – floor-length black gown with jewelled turquoise straps crisscrossing the just-appropriately low back of the dress. I wore my latest dress – a purple straight lined floor-length dress, covered in teeny glittering beads, and a diamond cut-out in the back.

As we giggled in the back of the car, wondering out loud if we were going to have an “entrance” from the car, we rounded the corner to see a magnificently lit Konzerthaus at the Gendarmenmarkt. As we approached the drop-off, we quickly realized that a push of reporters was indeed filming and taking pictures as people were helped from the car. We removed our coats – my sister held mine as I exited the car, doing my best to mimic those countless videos we have all seen of the glamorous limo exits.  Red carpet spanned the Lincoln-memorial-sized stairs, and snaked its way through the press photo-tent, television interview area, and along throngs (can this even be possible) of die-hard classical music fans, waiting to glimpse their favorite classical music star.

As we exited security, we were ushered aside by our ever-fabulous Publicist, Maren Borchers of “For Artists”.  In a straight black woolen coat, cut at an angle, a purple feathered boa, and an ear piece connected to on-and back-stage, she orchestrated her artists, first sending one and then another ahead to the carpet. She sometimes repeated a snippet here or there “lost wardrobe, trouble with moving camera above stage, drink areas ready to go…..”.

As all four Artemis arrived, their plus-ones gathered as well, and were ushered around to a side carpet, to reconvene with us later. First we strolled to the photo area, where a blizzard of flashes came from the wall of photographers – first one, then the other grabbed our attention, calling for us to look their way next. Then, to the corner where the TV reporter asked specific questions as to our award and repertoire represented on the CD.  It is at this point that I must say that this award belongs not even a hair to me – this was an award for a glorious cd of Brahms released by the Artemis.  It belongs to Vineta, Gregor, Friedemann and Eckart. Nonetheless, they included me in these festivities, toasting to the next Echo – for the four of us.

As we entered the already-packed building, in which the rectangular hall is surrounded by wide, marble hallways, we were greeted by musicians, managers, record companies, and a seemingly endless line of crisply-dressed wait-staff, holding everything from molecular-gastronomy smoking test-tubes filled with neon-green delicious substances to traditional hearty German food, albeit in amuse-bouche form. Also making the rounds was an updated form of the cigarette girl – with the same tray and neck-ribbon, but in her tray, a dizzying array of top-tier chocolates. Oh my. I took three.

As quartet fanned out, each person looking for any number of people with whom Quartet has had business, is in negotiation for business, or wishes to begin a new venture, I again saw these people in their finest – able to talk with anyone on any subject – charming, succinct, creative.  I met our manager, the inimitable Sonia Simmenauer, our photo-makeup artist, a reporter in the midst of writing a large article about the quartet.

We were ushered into the hall – a large rectangle with velvet chairs, and a full two balconies. I felt like I was in one of those period books – looking around at those in the boxes, trying to recognize the stars. The ceiling was covered in many large, matching chandeliers, camera people roamed the aisles, and a large camera on a pulley spanned the entire hall. We were seated close to the front, where winners were placed to facilitate easy access to the stage.

The moderator, Thomas Gottschalk, (their version of Letterman) was charming and witty as he lead us through the basics – allowing us three different dynamics of clapping, and even singling out specific audience members with a funny comment here or there.

The next three hours were filled with dazzling performances (unfortunately Jonas Kaufmann – be still my fluttering heart – was unable to sing due to recent health issues – but he spoke and I got to see his dimple from a distance of inches!), from vocal to instrumental to orchestral. I had never heard Philippe Jaroussky before, and I was floored by his rendition of Handel. After his performance, my sister and I turned to each other and said “what the **** was that” – we were without words.  Guest speakers from Cold Play’s Chris Martin to author Donna Leon rounded out the show.

As we were called to the stage, each of us immediately assuming a larger-than-life persona, I was again struck by the strength of this group. Through thick and thin, they rise and meet the day with hand outstretched, ready to tackle any problem and grateful for the support given them.

My sister and I returned home, heads to pillows around 2 am. The after party, with its amazing array of foods and drinks, was like being in a Top Chef episode. A full 11 hour extravaganza – and I couldn’t for the life of me get a wink of sleep.