From an essay by Nicholas Till in the Times Higher Educational Supplement:

At the end of a long day at the Venice Biennale last year, I stumbled upon the Polish pavilion in one of the furthest corners of the Giardini: the park where the art festival is presented. The brief statement posted at the entrance to the pavilion explained that it contained an artwork calledHalka/Haiti 18°48´05˝N 72°23´01˝W, by C. T. Jasper and Joanna Malinowska. This consisted of a video of a performance of the Polish national opera Halka in a village in Haiti where a significant number of people are descended from early 19th-century Polish settlers. (The figures in the title are the map coordinates for the village.)

Inside the darkened pavilion was a video projection on to a screen that curved around the space like a 19th-century diorama. The images showed the centre of a clearly very poor village. Plastic chairs had been placed under trees in a semicircle to mark a performance space that mirrored the semicircle of seats in the pavilion. Amid this setting, Polish opera singers in 19th-century costume were enacting Stanisław Moniuszko’s 1848 romantic village melodrama, accompanied by an electric keyboard.

Groups of villagers clustered to watch, some chatting with each other, many absorbed, or perhaps just politely pretending to be. Other people came and went. Children played in the dust, which they shared with pecking chickens and a tethered goat stoically ignoring the maelstrom of sound and action that was whirling around it. Every now and then a moped would roar noisily through the performance area and disappear down the road out of the village. Spurned by her aristocratic lover, the opera’s heroine, Halka, threw herself to her death. Something about the sheer incongruity of this juxtaposition of overblown European opera and everyday life on a Caribbean island, and the sense of immersion created by the installation, ambushed my normal defences and, no doubt facilitated by a bit too much of the hospitality prosecco, tears started rolling down my face. 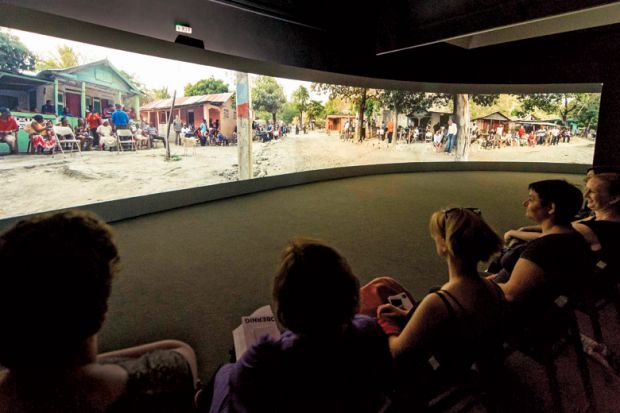