Pittsburgh Symphony: Why we won’t yield to the musicians

The organisation has just published a hardline, lengthy statement in response to the musicians’ strike.

It boils down to this:

In order to chart the course for a fiscally stable Pittsburgh Symphony Orchestra, management has asked that musicians absorb a 15 percent salary concession, and that they agree to transition the current defined benefit plan fully (the plan is already partially closed to new participants) to move to a defined contribution plan with an eight percent contribution for all musicians.  Management has also asked to freeze three open positions in the orchestra for the term of this contract….

Pittsburgh Symphony Orchestra musicians are exceptional artists, and deserve every dollar and every benefit we can afford to offer,” said (President/CEO) Melia Tourangeau (pictured). “At the same time, at this moment in the Pittsburgh Symphony’s history, we absolutely must dedicate ourselves to a course correction to ensure long-term sustainability for the orchestra.  We are deeply committed to an orchestra that will continue its leadership role in the industry, in the Pittsburgh community, and around the world. 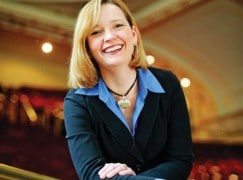