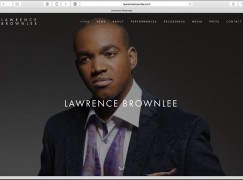 Now a star tenor is on a weight-loss fundraiser

Martin Anderson may have started a trend yesterday on Slipped Disc when he began a weight-loss programme to raise funds for his record label.

Today, Lawrence Brownlee announces ‘Larry’s September Weight Loss Challenge Autism Fundraiser’. The US tenor is asking friends and colleagues to donate to Autism research for every pound he loses during the month, in support of his son Caleb.

As many of you know, my six-year-old son Caleb was diagnosed with Autism as a child, and while he is doing fantastically, I still believe it’s important to raise awareness and research funds for Autism. My amazing father-in-law Kenny Wilson is going to do a Half-Ironman (1.2-mile swim, a 56-mile bike ride, and a 13.1-mile run) in order to raise money for Autism Speaks, and I’d like to help!

Following Kenny’s remarkable example, I’ve been working to lose weight this year – 30 pounds down already, and 15 more to go! For the month of September, I’m going to go through The Whole30 diet plan (http://whole30.com/), and I’d love to have your support!

I’m asking you to pledge to donate to Kenny for every pound I lose in September – if you pledge $5 per pound and I lose 5 pounds, then that’s $25 to Autism research! You can join by filling out the form here: http://bit.ly/2c9aB72, and then following my progress on my Facebook Page (http://bit.ly/2crmABt).

You can also just donate directly to Kenny on his fundraising page here:http://bit.ly/2c4TUe4

Thanks so much for your support, and I’ll see you at the gym!