Brett Mitchell, Associate Conductor at the Cleveland Orchestra, has been named music director of the Colorado Symphony from next season.

Brett, 37, has also been in charge of Cleveland’s youth orchestra.

Colorado has bounced back from har times with its first budget surplus.

Meantime, many congrats to Brett and his radio presenter wife, Angela Mitchell. 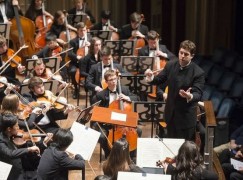 September 12, 2016 – Denver, CO – For the first time since its inception in 1990, the Colorado Symphony is reporting its strongest financial health as it opens its 2016/17 Concert Season on September 16, 2016. The Symphony eliminated its decades-old deficit with a $1.5 million matching challenge grant, issued in February 2016 with a short, five-month runway to be met. Upon the close of its fiscal year on June 30, 2016, the Colorado Symphony was able to meet the challenge and report a significant surplus, with cash in excess of $1.7 million, versus $7,000 on June 30, 2015.

“This is a momentous time for the Colorado Symphony,” said Symphony CEO and Board Co-Chair Jerry Kern. “We’re in our best fiscal position to-date with an unprecedented budget surplus, and the staff, donors, musicians, and board are more unified than ever in reaching our artistic and financial goals.”

Founded 26 years ago in the wake of the Denver Symphony Orchestra’s mid-season bankruptcy, the Colorado Symphony has struggled for solvency since its beginning. Only five years ago, on the heels of the recession, it was facing yet another collapse.

It was around that time in 2011 Jerry Kern, and his wife, Mary Rossick Kern—a long-time Symphony advocate and its former Director of Development—renewed their roles as co-chairs of the Colorado Symphony’s Board of Trustees. By February 2013, Kern stepped in as CEO for a $2 annual salary.

The Kerns attribute this historic financial turn-around to the matching challenge grant, and to making significant revisions to the orchestra business model to suit Colorado audiences.

“Our classical repertoire and level of performance is the best in the region, and the loyalty of our subscribers makes this evident,” said Kern. “But we have to recognize that Denver is a changing city, with younger audiences to engage. We need to stay current, and we’re seeing great success through our collaborations with artists including the Flaming Lips, Elephant Revival, and Gregory Alan Isakov.”

The 2015/16 Season was Andrew Litton’s last as Music Director, and he will serve as Principal Guest Conductor for the 2016/17 and 2017/18 Seasons. Litton joined the Colorado Symphony as Music Director in 2012, and is credited with expanding the orchestra’s breadth of recordings and upholding an unwavering commitment to the highest performance standards during his tenure.

Mitchell was unanimously selected by musicians and artistic leadership alike—a rare occurrence in the orchestra world when making such a momentous change. Yet Mitchell’s energetic talent on the podium, enthusiastic vision for classical and popular symphonic repertoires, and winning charm made him the clear choice for the role.

“Brett’s skill, character, and creativity won us all over, and he’s completely on board with our mission for innovative artistry and financial success. We are beyond excited to work with him to develop our programs, and can’t believe how lucky we are to have found such a great fit for the Colorado Symphony—especially in a relatively short amount of time,” said Chief Artistic Officer Anthony Pierce, referring to the sometimes years-long process a Music Director search can require.

“From the first downbeat of our first rehearsal together, it was clear that the Colorado Symphony and I had that special chemistry vital to any great artistic partnership,” said Mitchell. “I was hugely impressed by the musicians, and am so pleased to make great music together in the coming seasons. My wife Angela and I are thrilled to be coming to Denver, and we look forward to getting to know the people and places that make the Mile-High City one of the greatest in the world.”