Fort Worth strikers are losing the media war

The Star-Telegram newspaper, whose president is a symphony board, has turned against the musicians who have gone on strike over wage cuts. First the paper ran a hostile editorial.

Now it presents a strongly slanted selection of readers’ letters.

I support the Fort Worth Symphony Orchestra’s efforts to reduce costs.

Even after the proposed cuts, musicians in the FWSO will still be making more money than Fort Worth schoolteachers and much more than police.

There is no shortage of qualified musicians who would love to have the jobs that the current musicians have rejected. The FWSO cannot stay in business and meet the musicians’ demands.

I encourage the symphony to start auditioning replacements right away in order to minimize the number of concerts that will have to be canceled this season. 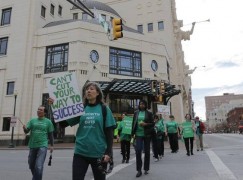