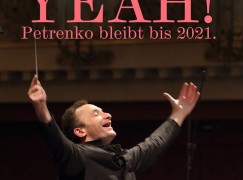 Sixteen months after it elected Kirill Petrenko as music director, the Berlin Philharmonic expects him to sign a contract on October 6, at 2:30pm.

Petrenko has been playing hard to get. Since the election, he has extended his stay at Bavarian State Opera to 2021 (below) and has recently appeared in Berlin, to tumultuous acclaim, with the Bavarian orchestra.

He will not take up the baton as music director with the Berlin Philharmonic until 2019, a year after Sir Simon Rattle’s departure. But the contract signing will at least provide a measure of relief after months of uncertainty.

« BBC names Blairite as head of radio and music

Anti-capitalist opera to receive US premiere »