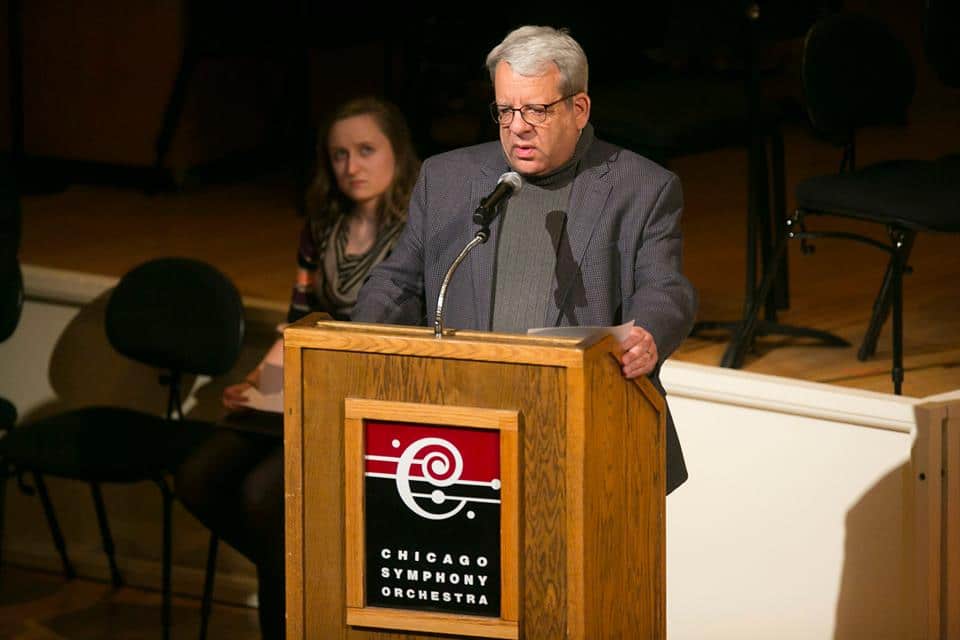 First Graham Parker quit as general manager of New York’s WQXR to head Universal’s classical labels in the US.

Steve, 69, Robinson told Tribune music critic John Von Rhein: ‘The decision was definitely mine and mine alone. I felt it was time to hand the baton off, that’s one reason. And I also feel it’s time for me to stretch my entrepreneurial wings in the for-profit world.’

“It is with great regret that we bid farewell to an indispensable member of our WFMT family,” said President and CEO Dan Schmidt of WFMT and WTTW. “It is difficult to imagine the station without his unflagging energy, endless creativity, and deep knowledge of classical music and radio operations. He will be greatly missed, and I know I speak for all of us when I wish him success in his future endeavors.”

“Working at WFMT and the WFMT Radio Network has been the greatest privilege and challenge of my career,” said Robinson. “When people ask, ‘Oh, you run WFMT?’ I always say, ‘No, I run after it.’ And that’s because everyone at WFMT is immensely creative, knowledgeable, and passionate about their work, and all I’ve really done is try to harness this incredible talent to move the station forward. If it has progressed at all in the 16 years I’ve been there, it’s because of them, and I will always be grateful.”

Steve has led WFMT and the WFMT Radio Network since 2000. Under his leadership, WFMT diversified its programming and increased its member base, and the Network became a leading producer and syndicator of music and spoken word programs. In 2002, Steve brought to the WFMT Radio Network a live broadcast of Princess Magogo, the first indigenous South African opera and the first with a libretto in the Zulu language. Steve hosted, and the opera was heard by more than four million listeners throughout the U.S. and Europe.

Steve created Exploring Music with Bill McGlaughlin in 2003, a daily series heard by more than 400,000 listeners a week, and he also instituted a comprehensive subscription website. Other popular WFMT series and programs created during Steve’s tenure include include Impromptu, a daytime showcase for local and visiting artists; Introductions, a unique weekly series that features promising young pre-college musician; and the Studs Terkel Radio Archive, which was launched in 2015 in partnership with Chicago History Museum. Last year, at Steve’s direction, the Network began exporting classical music radio concerts by American ensembles for broadcast in China and importing Chinese music performances for broadcast in the West, marking the first time a cultural exchange of this kind had happened between America and China.

In 2007, the Chicago Tribune named Steve a “Chicagoan of the Year” in the arts. His many other honors include two Peter Lisagor Awards for Exemplary Journalism; the ASCAP/Deems Taylor Award; two Westbury Awards from the Red Cross of Greater Chicago for coordinating fundraising efforts among the city’s television and radio stations in the wake of the 2004 tsunami and the 2010 Haiti earthquake; an Award of Excellence from the Chicago Sinfonietta; a special award from the Illinois Philharmonic; the first Champion Award from the Merit School of Music; and, with Bill McGlaughlin, Dushkin Award from the Music Institute of Chicago– previous winners have included Sir George Solti, Daniel Barenboim, Placido Domingo, Yo Yo Ma, Midori, Leon Fleischer, Sir Andrew Davis, and Mstislav Rostropovich.

Steve currently serves on the boards of Cedille Records, the Merit School of Music, the Chicago College of Performing Arts and the Rush Hour Concerts. His past board service includes the Grant Park Orchestra, Chicago Children’s Choir, the Chicago Youth Symphony Orchestra and Music in the Loft.