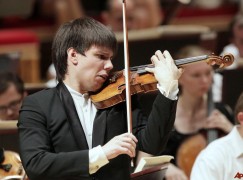 Shanghai fix: Half the finalists were taught by two of the judges

The six finalists of the inaugural Shanghai Isaac Stern International Violin Competition were named today. They are:

We warned before the contest opened that two of the judges tend to pick their own students as winners.

That’s exactly what has happened.

Kishima and Tarara are students of the compromised Zakhar Bron. Tarara works as Assistant to Prof. Zakhar Bron in Interlaken, Switzerland. Impossible to imagine that Bron’s judging could be objective.

Dogadin is Boris Kushnir’s pupil. He has already won the Joseph Joachim Competition, which Kushnir judged.

This is why we keep campaigning for competitions to be cleaned up.

UPDATE: David Stern: My father would have been proud of this competition

« Ian Bostridge, the German version: Audience are to blame