Pittsburgh Symphony is ‘at critical crossroad’

The orchestra has posted a $1.5m deficit and its new president Malia Tourangeau says it is running low on donors. The musicians’ contract expires next week.

There’s a looming $10m hole in the pension fund and the Heinz Hall lacks basic cabling for HD streaming.

Everything needs an upgrade. Report here. 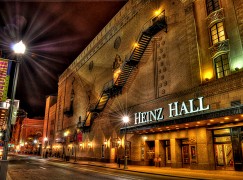