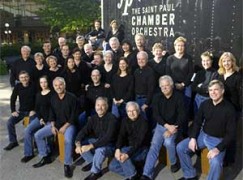 The widely-reported drugs case against David Roy Huckaby, a former cellist in the St Paul Chamber Orchestra and the Detroit Symphony, has been dismissed after a judge ruled the police had no right to search his car.

Police said there were 113lb of marijuana in his car.

His attorney notifies us:

All charges against Cellist David Huckaby were dropped by the Klamath County Oregon Circuit Court. The Court granted a motion to suppress evidence which consisted of over one hundred pounds of marijuana. The motion was filed by Huckaby’s attorney, Phil Studenberg of Klamath Falls, Oregon. The motion argued that there was no probable cause for the search Huckaby’s vehicle and it violated the Oregon and U. S. Constitution prohibitions against unlawful search and seizure. The arresting officer cited several reasons for the search, none of which were sufficient, according to the Court.

The Oregon Attorney General declined to appeal the matter.

“David’s case is a perfect example of what is wrong with the War on Drugs,” Studenberg stated. “It ruins the lives of talented young people and stigmatizes them for life. I’m just glad we prevailed in David’s case and he can carry on with his career.”