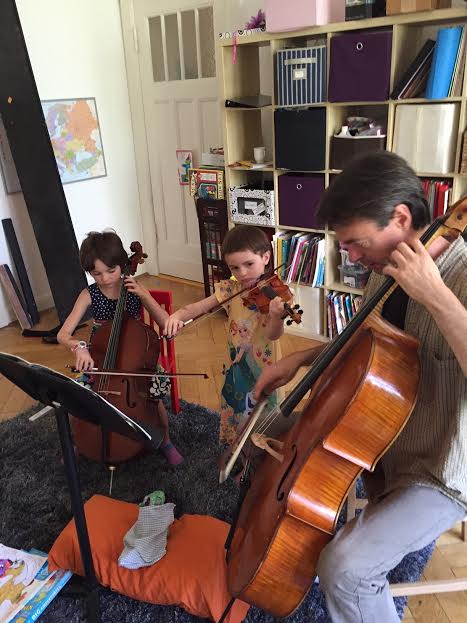 New season: I’m at the airport, my passport’s at home

Like many of us, violinist Anthea Kreston of the Artemis Quartet is struggling to adjust to that back-to-work routine. Here’s her weekly diary for Slipped Disc:

I am at the Berlin Tegel airport – 45 minutes before our plane leaves. I just realised after getting here that I forgot my wallet and passport on the breakfast table and I am waiting for a drive-by window drop off from Jason with sleepy girls* in PJ’s in the back seat, hopefully in time. Heading to Netherlands today, festival in Germany tomorrow.

This week’s rehearsals have been really nice – refreshing old works hardly feels like refreshing – it feels new and exciting. Comments like “I know I never mentioned this before, but I wonder, in this moment, if we could delay our transition from desperation to hope by another half bar”.  How lucky am I? To be a daily part of conversations like this – to always bring my best and not have it good enough. This is wonderful.

There have even been a couple of newly minted words and markings this week (and a lot more of rehearsal time is in German).  My favorite – smileando – a melting into a smiling character. Before I write my next diary in a week I will have played 10 different works (and begun work on 3 new quartets).

My older daughter started school at John F Kennedy this week – and she (and I) love it. To just have the English language, with the American accents, surround me as we walk through campus feeds my home-sickness just enough. And we now are developing a nice group of friends – her new best friend lives across the street and is the daughter of a mother from Wisconsin and a father from Munich.  Just yesterday I met the dad of another first grader – he said – “wait a minute – you are married to Jason?  We went to Tanglewood together!”.  We ended up all meeting at a park and spending a lovely afternoon together.

Wait – there is Jason – I will run and get my passport!!!! Aaaaa just in time!  I am waving frantically and jumping up and down!  Can’t believe he got here in 27 minutes.  *sigh*, my hero.

Ok through security and back now…..

Also – the quartet had planned a sabbatical several years ago – which is to happen summer-winter of 2017.  After the death of Friedemann and the subsequent 7 months of questioning, auditioning, concertizing and processing, this sabbatical still loomed – the manager was not to book concerts for 6 months and people were to explore their own paths. The idea was to come back refreshed. But – it occurred to all of us just a month ago that it would be better to open up the sabbatical – just for the odd free days here and there – since we are all just discovering our new quartet voice. So – a light fall for quartet, but this has forced me to get out and about – meet people, develop projects.

So – the big news is that we have decided to keep the trio going – we have a new pianist (news to come soon) and plan on some touring next season. Also – a string trio concert came in from our German manager, and they offered it to Jason and I. We contacted Volker Jacobsen, original Artemis violist – all-around super guy and incredible player, and voilà!  The Humboldt Streichtrio is born, with several concerts being planned.

Ok – signing off now – this week’s diary written while at airport and in security line. I am sitting in my seat, belt buckled, heading to Amsterdam. Another festive week!

11 Brits in race for German medals »