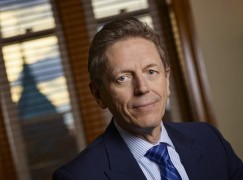 The beleaguered Toronto Symphony Orchestra have appointed an interim chief executive to dig them out of several holes of their own making.

The new man is Gary Hanson, who retired last year as head of the Cleveland Orchestra, where he spent almost his entire career.

Hanson, whose origins are in Toronto, is a safe pair of hands at the tiller, allied to a strong strategic mind. He secured Cleveland’s various residencies at European festivals and in Florida, and he formed a secure partnership with music director Franz Welser-Most.

His first task will be to conduct a music director search. Peter Oundjian departs next year.

The next fires he will have to fight are the detritus left behind by his capricious predecessor, Jeff Melanson, who departed after a issues of staff relations and a social scandal.

The Toronto Symphony Orchestra (TSO) announces that Gary Hanson has been named Interim CEO of the TSO. Gary Hanson, a Toronto native, was chief executive of The Cleveland Orchestra until his retirement at the end of 2015. Mr. Hanson was appointed at a special meeting of the TSO Board of Directors, on Wednesday, August 17, and will begin his term on September 26, 2016. He will serve in the role for up to two years.

Mr. Hanson joins the TSO following the successful 2015/16 season and the achievement of a third consecutive year-end surplus of revenues over expenses.

Going forward, Mr. Hanson will champion and continue the TSO’s successful work in fundraising and community outreach, and will play a key role alongside the Board of Directors in creating a comprehensive vision and strategy for the TSO’s future. Mr. Hanson will manage the ongoing search for the TSO’s next artistic leader in collaboration with the Music Director Search Committee. He will also support the TSO Board in engaging a leader to succeed him as permanent CEO.

“On behalf of the Board, I am very pleased to welcome Mr. Hanson to the TSO family. Gary’s superb track record, the esteem he has across the industry, and his well-proven management skills will help sustain and advance our positive momentum as we prepare for the future,” said Richard Phillips, Chair of the TSO Board of Directors.

In addition to working with the Board, Mr. Hanson will lead the TSO staff and will partner with the Orchestra’s musicians to ensure continuing artistic excellence, collaborating closely with Peter Oundjian during his final two seasons as Music Director.

Mr. Hanson said, “I am deeply honoured to accept this position and feel privileged that I can play a role in ‎the future success of my hometown orchestra. I look forward very much to working with the outstanding musicians and staff of the Toronto Symphony. Likewise, I am excited by the opportunity to partner with my long-time friend Peter Oundjian and joining in the celebration of his extraordinary tenure.”

Board Chair Richard Phillips thanked Sonia Baxendale who temporarily stepped off the TSO Board of Directors in March 2016 to lead the organization. “Sonia’s leadership and dedication at the TSO this year was instrumental in achieving our third year of positive results and in supporting the growing engagement of the Orchestra with the community. The organization is on a strong footing financially and operationally and her contribution has positioned us to select the right transitional leadership for the TSO. With Gary Hanson in that role, the Board now has ample time to identify a permanent CEO and ensure that the TSO continues the successful momentum we’ve established,” said Mr. Phillips.

Ms. Baxendale responded, “I was pleased to step in and assist the TSO as it becomes the vibrant organization that we all desire. I was privileged to work alongside a very talented team of senior leaders and musicians and I look forward to returning to the Board of Directors and continuing to support Gary and the TSO in the years ahead. It’s a very exciting time at the TSO and there are many wonderful initiatives ahead.”

In addition to finishing its 2015/16 fiscal year with an operating surplus, the TSO also reduced its accumulated deficit by approximately $4 million (from $12 million to under $8 million). These results were possible through an increase of more than 1,000 new donors versus last season, growth in all donor categories, the donation of a 1703 Amati viola, and strong support from the Toronto Symphony Foundation. In 2015/16, the TSO was able to achieve a 20-year record high in donations.