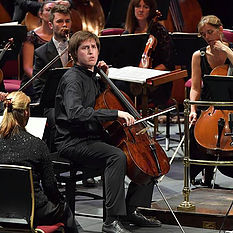 Cellist who saved a BBC Prom with minutes to spare

At 0935 yesterday the Royal Liverpool Philharmonic were informed that their Proms soloist Truls Mork was sick.

At 1529 his replacement Alexey Stadler flew into Heathrow, little-known and 25 years old. At 1640 he was rehearsing on stage. At 1930 he made his Proms debut.

No announcement was made to the audience.

So how did he do?

Ariane Todes was there:

…This was an intelligent performance of Shostakovich’s First Cello Concerto, with long lines and beautiful phrasing. If it was under-rehearsed, there was little evidence … Stadler holds his cello quite low, reminiscent of Rostropovich, but as yet he lacks the weight of sound and depth of vibrato of that master. There might have been a little more ugliness and anger in the characters of Shostakovich’s acerbic concerto, but no doubt that will come with age. Indeed, the Bach (the Sarabande from the Suite no.2) suited him better, beautifully conceived, simple and unmannered, but expressive and meaningful. It certainly made me want to hear more from him, and I’m sure we will.