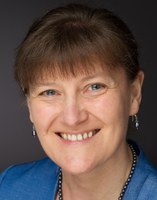 The Faculty of Music is pleased to announce that Professor Katharine Ellis has been elected to be the next 1684 Professor of Music. She will take up the post on the retirement of Professor Nicholas Cook at the end of the academic year 2016–17.

Professor Ellis is a cultural historian of music in nineteenth-century France. She has published on the history of music and education, on women’s musical careers, on music criticism, reception history and the press, on opera and its institutions, on Paris-province relations, and on musical fiction. Current projects include a monograph on musical life in regional France 1830–1914, research on concepts of the religious in French musical culture, and a co-authored book entitled Paris in Counterpoint.

Professor Ellis was inaugural Director of the Institute of Musical Research at the School of Advanced Study, University of London. In 2010 she was elected to membership of the Academy of Europe. In 2013 she was elected Fellow of the British Academy and took up The Stanley Hugh Badock Chair in Music at the University of Bristol.

« Katharina Wagner is loudly booed in front of Chancellor Merkel