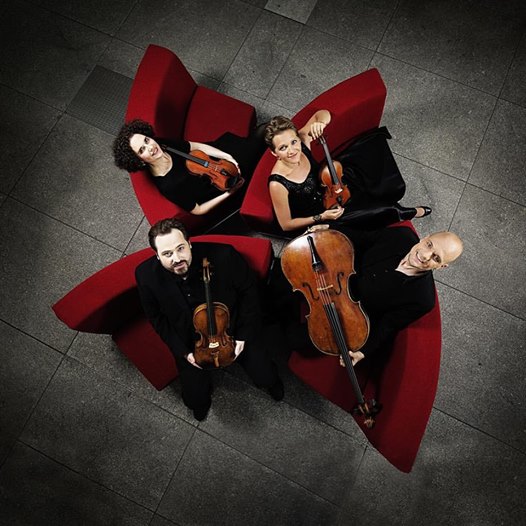 On meeting my quartet in shorts

The Artemis Quartet got together this week, breaking into their holidays to catch up on a photo session…. and work out how much they need to rehearse before every repeated concert on tour. Two hours, apparently. Our diarist Anthea Kreston takes us into the nitty-gritty of quartet conversation.

Our two weeks in the Italian Dolomites at the Music Academy International wraps up tonight with an outdoor concert at the town square, with students and faculty playing together. I am on a flight from Geneva to Venice – I had to leave for two days to play concerts in Berlin and Geneva with the Artemis. Tomorrow Jason and I have the pleasure of introducing the girls to Venice for the first time – three days in a VRBO and exploring!

It was fantastic to have family time these last 14 days, and it made getting together with the Quartet for our two concerts that much sweeter. We met in Berlin at our regular rehearsal space – some of us tan, some of us with shorts on for the first time. Real summer is here. Our Berlin concert was a blast – a combination of BargeMusic and Le Poisson Rouge. Set directly on the Spree River (on the boundary between old East and West Berlin) on an open barge stage.  The audience was spread between three boats that came from different ports throughout Berlin, moored to the barge, an audience barge between the concert stage and club, and several floors of the techno night club on the pier, the wall of windows open to the river. Drinks were flowing, and the mixed audience (tickets were hand stamps) was interactive and energetic. The beautiful brick bridge also sported crowds of audience, getting free tickets by cramming into the pedestrian arches. I felt like a rock star.

Yesterday we went to Geneva for the final summer concert until late August. I had a chance to take a long walk through the city – something I try to do any chance I get. I know that I will come back to most of these cities again, and what a pleasure to be able to travel so widely as a member of this quartet. Quite spectacular.

Last night at the post-concert dinner, we were talking about this past 5 months. 37 concerts under our belts, and now we will not meet again until the end of August. We talked about a lot of things, including basic repertoire organization. The Artemis likes to play three concerts of repertoire each season (9 pieces) plus 3 “jokers” (other repertoire that the presenters can mix and match).  There are also the standard add-ons – some viola, cello and piano quintets. I love that we have the chance to really grow with this repertoire – it is a rare treat to be in a group which has total control over their concert programs. Often, in the States, it is required to have “Theme” programs – named programs with something that ties a program together (often loosely) in order to attract audience and to market more easily. But, the Artemis is a theme unto itself – it can pick repertoire solely for artistic purposes, and this allows us to rehearse deeply, and to perform the repertoire many times. The freedom on stage is incredible.

The only potential drawback is the possibility of losing inspiration. When we played in Schwartzenberg the other week, I decided to play the entire concert (which is essentially memorized by this point) only looking at the people who I normally never look at during that particular moment. It was a lot of fun, and I was surprised at how much was going on that I had not been paying attention to.

Backstage, yesterday before our final concert of the season, I asked everyone if they ever have trouble with inspiration. (By now, the quartet can tell when I am gearing up to write a Diary entry, because I start to ask specific quartet questions.) Especially Ecki – he has been in the Artemis for 27 years, and has played these pieces countless times. But – he (and also Vinny and Grischa) is always fresh, always finds his inspiration, clearly enjoying the moments – always with a surprise color or sweep of the phrase.

We talked about the natural flow – the first concerts on new repertoire we are all focused, messing up a little bit, nerves raw. Then we hit the beginning of a flow, then the sweet spot – around concert 15.  But after that – this is tricky. It is an easy tendency at this point to start to exaggerate your characters, your dynamics, even your facial expressions. Then, after these couple of concerts, total comfort. Fantastic. I love how this quartet allows and encourages individuality. I sometimes play with my eyes closed, and I remember back in my old quartet days, how this would be a major point of contention. It was not something I planned or intended – it is hard to control. It signifies inner joy and transcendence, and it is such a pleasure to look around the Artemis and to see one, and then the other, close their eyes and relinquish themselves to the music, to the moment.

One thing that I think really keeps this quartet fully engaged and mutually inspiring is that they rehearse before every concert for 1.5-2 hours. This, in my experience, is unusual for a group which plays so many concerts. And the rehearsals are intense. For example, yesterday we played Mozart 387, Janacek 1 and Beethoven 59 #1, all of which we have played around 20 times. We started at the end of the Janacek, building intonation very slowly first with the lower strings, then adding upper strings. We worked in detail backwards through the piece – balance, intonation, passages were played with metronome, and we even reworked who would lead certain measures and changed timings. Some of the members of the group write in the decisions, dating them in the margins, so we have a clear map of what we have decided and when.

Then we went to the Beethoven – again backwards. Intonation on the final Presto, changing the length of the quarter notes in the final 3 bars (long, wait – longer longer). Then, after working backwards, we arrive at the first movement. That section between the first and second theme, where we are homo-rhythmic. We just were not together in the 6th bar of that. We stopped and I said “I am so annoyed at myself. Why aren’t I with anyone?” We have never really been good at those two beats. So – we tried a new bowing, suggested by the cellist. A strange idea to play three down bows in a row, the final one a long bow which lasts for a measure and a half. Funny – strange, but somehow it works. And – in the concert – a little twinkle of the eye as we get to that measure – we finally got it!  After 5 months!

Then to the Mozart. We talk a little about what the audience reaction has been to each piece, and decide to try the Mozart with more lightness and air throughout tonight. And new ideas in the Minuet and Trio – there is something that happens 6 times, and we decide to take time two times, not two times, and leave two up in the air. And – after the concert – the presenter says “your Mozart was exquisite – transparent and like lace”.  Great!

So – this is how we stay inspired. As we shared a final toast to our first 5 months, and a round of quartet hugs, we all bid farewell for the next 5 weeks.

Conductor claims she was fired for getting pregnant »