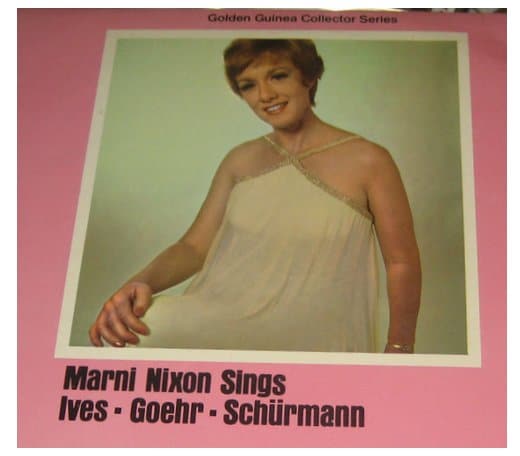 Marni Nixon: Artists will do things for nothing to keep the art alive

The celebrated Hollywood dubbing singer, who died this weekend aged 86, was a classically trained artist who attended classes with Lotte Lehmann and calimed to be among the first on the West Coast to sing Charles Ives.

In an interview with Bruce Duffie, transcribed by Una Barry, Marni Nixon reflects on the future of opera:

BD:    Are you optimistic about the future of the opera world?

MN:    Yes, it is sad because it’s all on the artists shoulder.  The artists will be the ones who will do things for nothing to keep the values alive eventually.  The people who maybe have been stung or can’t sustain the crazy career lifestyle they put you through will go back to their grass roots community and maybe will start their own little opera companies, or plug in to the community opera that already exists, and will define for that community some kind of excellence.  Eventually the young people will learn from them, and will come around full circle to the big cities and will know more on how to define themselves.

But it’s all so rough.  If only there were some kind of umbrella organization that could exist, or if there were some kind of subsidy or some kind of training ground.  This is an eternal dream I’m sure in everybody’s day.  But now it’s going so fast that it seems to me all the advocates are going down the drain because they can’t sustain themselves financially.  Television entertainment has deadened our minds, and the singers have no knowledge of literature.  They don’t know history, they don’t know the famous singers, they don’t run around to look at who’s in town. “Oh, there’s this singer!  I know this singer and she’s supposed to be a good recitalist.  I’ll do anything to get out of school and cut classes and go to hear this person and then learn these songs.”  They want to learn what they’re told to learn quickly, and they have their goals defined now. “I’m going to get to this audition.  I’m going to learn these pieces and I’m going to win this audition.  I’m going to get $2,000 and then I’m going to win this next audition, and then I’m going to learn this program.”  It’s not defining their whole life ahead of them.