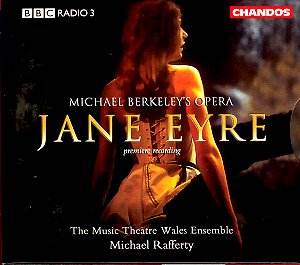 A Charlotte Bronte opera that occupied twenty years of composer John Joubert’s life until its completion in 1997 is to receive its world premiere on 25 October 2016, at the Ruddock Performing Arts Centre in Birmingham.

Joubert will turn 90 next year.

A previous Jane Eyre opera by Michael Berkeley and David Malouf was stolen from the composer’s car in 2000. He rewrote it with lighter instrumentation.

From its first publication in 1847, Charlotte Brontë’s masterpiece Jane Eyre has inspired innumerable theatrical interpretations for both stage and screen. To mark the 200th anniversary of Brontë’s birth in 2016, and in anticipation of British composer John Joubert’s 90th birthday in 2017, Kenneth Woods and the English Symphony Orchestra will premiere Joubert’s opera based on Brontë’s first and most popular novel.Jane Eyre will receive its world premiere in a concert performance on 25 October 2016, at the Ruddock Performing Arts Centre in Birmingham. The SOMM label will be on hand to capture a live recording which is scheduled to be released in March 2017 to coincide with Joubert’s birthday.

Joubert’s Jane Eyre has been over two decades in the making, yet the seeds were sown as far back as 1969, when the composer penned his song-cycle Six Poems Of Emily Brontë. He became drawn into the world of the Brontë sisters and, perhaps inevitably, Jane Eyre. The result is a major operatic work with “a score of translucent beauty – Joubert’s undoubted magnum opus,” comments conductor Kenneth Woods. For the premiere, soprano Katherine Manley will portray the title character and baritone David Stout – who previously collaborated with Woods on a SOMM recording of Mahler’s Lieder eines fahrenden Gesellen – will take on the role of Rochester. They will be joined by a full supporting cast. The librettist is Kenneth Birkin, a post-graduate student of Joubert’s at Birmingham University whose Ph.D. focused on the libretti of Strauss’s post-Hofmannsthal operas.

Joubert’s output has been frequently inspired by great literature and he has set song cycles to the words of William Shakespeare, W.B. Yeats, Thomas Hardy and D.H. Lawrence, among others. His two other major operas are Silas Marner (George Eliot) and Under Western Eyes(Joseph Conrad). Joubert explains, “The criterion I use for the selection of operatic subjects is that they should comment in some way on basic human issues, thus bringing them into line with the Enlightenment idea of theatre as a ‘School of Morals’.”

Barenboim: The world is sick, so we’re changing the medicine »